This sure was something, I tell you what.

Before I get to the actual review, I do want to say that I am specifically referring to the version edited by Carmen Maria Machado, with an introduction and footnotes by her. Both things fundamentally changed the experience of reading this.

I am still boggled in the mind that this is a book about lesbian vampires and their young female victims being seduced, and it was written in the 1800s, before Dracula. It’s like, he just snuck the gayness in there under the cover of monsters, but I can’t help feeling that he was sympathetic to Carmilla’s desires. There isn’t a peep in here that is fearful of female sexuality (I suppose you could infer it, though I never got that feeling).

I was entertained from first to last with this version of the book. Machado’s introduction was, while confusing, informative and opinionated, and I would expect no less from her. I do wish she had clarified a little more about her accusations of plagiarism on Le Fanu’s part. The tone she wrote in, and the breaking of the 4th wall she does in the footnotes, lends the whole thing an air of unreality, and part of my brain still thinks she was telling me a story, especially since a cursory Googling leads me to nothing of which she was referring (letters found in a wall, some copied word for word into the text, some left out). It doesn’t help that she can’t seem to help herself re: poetic language, which is never used for clarity. If these were real documents, I really needed to know more about what was in them, and what Le Fanu changed. And we don’t.

The resulting book is still entertaining. This version also comes with some rather startling illustrations. 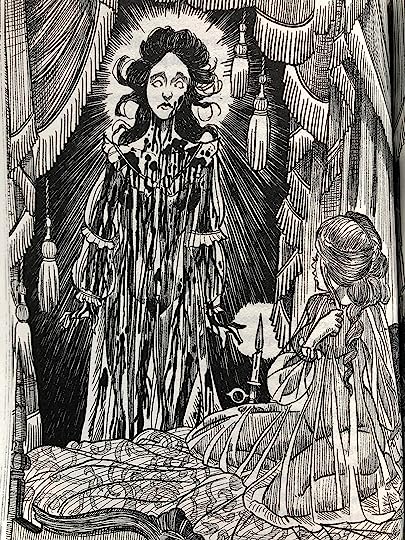 Machado’s footnotes alternate between informative, contextual, pure snark, and fiction. This was very strange, but I can’t say I didn’t like it. I ended the book wishing there had been more footnotes.

It is a bit hard to get a modern point of view into the mindset of this time period enough so that Laura and her father don’t seem like complete numpties for not putting the pieces together about Carmilla’s beyond strange arrival, her absolute obsession (out in the open!) and affection with Laura, and Laura’s resulting illness. But they didn’t have a hundred years of vampire stories seeping into the cultural zeitgeist, so I think we have to give them a little bit of a pass.

[3.5 stars, rounded up for this edition and Machado’s footnotes]