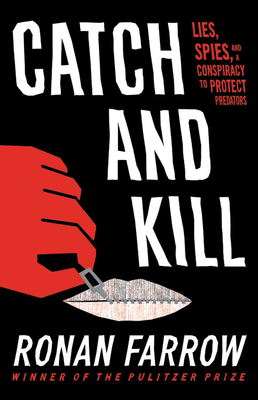 If anyone’s a long time Kfishgirl fan (like read my CBR posts in the past few years), you’ll know that my favorite thing / something that brings me silly joy is when the title of the book is mentioned in the actual book itself.  I also like when people run out of bullets in movies and throw their gun at their enemies, but that’s a different topic.  Catch and Kill is basically what media organizations were doing or are currently doing when there’s a big story that the main character doesn’t want to get out.  They catch the story by getting exclusives from people directly involved and usually hurt by a person, then make them sign non-disclosure forms to effectively kill the story and not let it get out.

As most of us know, everyone famous is hiding a lot of shadiness, and at least four skeletons in their closet, so this probably happens a lot more than we know about (duh, we’re not supposed to know!).  That’s HOPEFULLY an exaggeration, but I’m sure famous / infamous people have tons of stuff they don’t want the public to know about.

Anyway, there is a lot of talk about Harvey Weinstein, the producer / director / serial rapist.  Ronan Farrow lays out the details about how many women, assistants, and acquaintances came forward to talk about how HW sexually harassed or assaulted or raped them.  The stories are sickening.  To add to the general ick factor, the Cheeto (Mr. Trump) also favors heavily in the stories.

Let’s just say I spent a lot of time shouting swears at my audiobook app.

It’s a really compelling story, and I feel like lots of people should read it.  It’s one of those “preaching to the choir” situations though.  Like I’m never going to think it’s OK for someone to sexually harass / assault anyone, and especially not to hide it.  But the people who really need their eyes opened on the subject would never pick up this book.  Trigger warning for stories about sexual harassment and assault BTW.