I am sure better people than me have written a review about Maus I. And I honestly have to say that the art/panels/writing is wonderful. I read Maus I and Maus II together and both graphic novels tell you the story of Art Spiegelman’s father. Mostly it focuses on Mr. Spiegelman’s love/frustration for him and his mother.

Maus I shows us Art Spiegelman and how he came to sit and write/record the story of his father and his time in Auschwitz. We also follow his father’s current marriage to a woman named Mala, and what happened to the family unit after Art’s mother committed suicide. Spiegelman though took a step in showing the story of his father by having the Jews depicted as mice, and the Nazis as cats. Other nationalities are represented as other animals I noticed in Maus II. I saw someone who was French shown as a frog. I noticed medical personnel were always shown as dogs. I think the Swedish people are elks? I know I saw antlers.

The writing is so good. I don’t know if I could sit down and write the story of my parents and show it, warts and all. There are going to be times that you pity Valdek (Artie’s father) and other times you shake your head at him.

The panels being in black and white make what is being shown so stark. 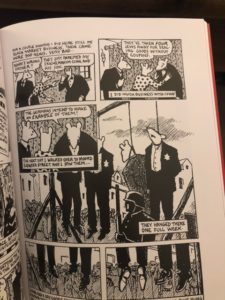 The ending was a heartbreaker for sure with Artie having a falling out with his father.

If you thought Maus I was a sucker punch, Maus II will just end up breaking your heart.

Maus II follows Vladek as he continues to tell his son Artie about the war and what he and his wife survived. Spiegelman does a great job of showing you the ending (his father’s death) and then working back to him dealing with what to say after the critical success of Maus I. We follow Artie and his wife as they try to deal with Vladek as he runs off to the Catskills, and then moves back and forth from the present day to his father’s past.

I don’t have a lot to say. The Holocaust was a horrific thing. I can’t imagine how the survivors’ deal with that. You would have guilt, PTSD, so many things. And you can see how things such as that impacted Artie in his writing and the story that he tells us about his father and his mother. He loved them both, he is frustrated with them both, and he felt smothered by them both. And haunted by a brother that died before he was born. I have to say that this book is darker if possible than book #1. Reading what happened to people, how some were, beaten, forced to fight for food and clothing. Fighting over a spoon. And then just killed.

Some of the panels seem very surreal when you look at the conversations going on around now surrounding teaching kids CRT in grades K-12 (which 100 percent is not happening). 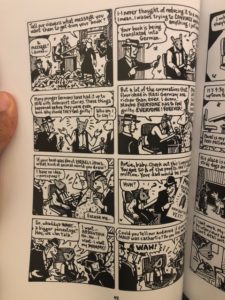 wpDiscuz
6
0
Would love your thoughts, please comment.x
()
x
| Reply
‹ Back to Categories