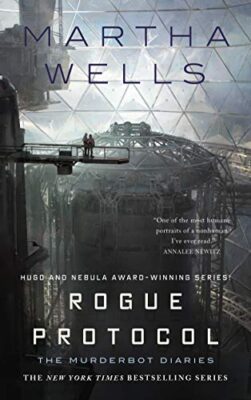 These are the third and fourth books in The Murderbot Diaries and, like the first two, they are full of intrigue, action and snarky humor. Murderbot, a rogue SecUnit who has been purchased and freed by one of its clients, is still at large, having snuck away from client/guardian Dr. Mensah in order to try to figure out why it murdered a bunch of humans on a previous job. MB’s memory was wiped by the company that owned it, but armed with incredible tech, hacking ability and weapons, MB has decided to investigate on its own. The matter gets complicated in these two novels, as MB has decided that investigating GrayCris, an evil corporation that nearly killed Mensah and her crew, is now a priority.

In Rogue Protocol, Murderbot hitches a ride to a distant planet called Milu, where GrayCris was running a fake operation meant to look like terraforming (legal) but was actually a front for an illegal mining operation. Since Milu is far off and abandoned, MB will have to be extra stealthy in order to find a way on to the site, where it expects to find incriminating evidence of GrayCris’ deeds. MB generally has little trouble with operations like this because ever since it figured out how to detach itself from the governing module that limited its actions and intelligence (thus making itself “rogue”), it has perfected the art of hacking the other shitty security systems it encounters. Its disdain for human security systems is pretty funny, and since it’s usually not too hard to access cameras, drones, codes, etc., MB multitasks, watching its favorite shows at the same time. In order to get to Milu, MB stows away on a ship that is taking a small research party, their augmented security guards (human/bot hybrids) and a little “petbot” named Miki to Milu to do an assessment. Miki loves its humans, especially the party leader Don Abede, and MB finds itself sort of horrified by Miki but also needing its help (and secrecy) to get to Milu. In exchange, MB promises Miki to protect Don Abede and the others. Miki is a delightful character who reminded me a lot of Dug Dog in the movie Up. Miki is not the brightest bot, but it is cheerful, kind and loyal. Naturally, on Milu, the best laid plans go pear-shaped, and MB is going to have to get a lot more involved with the humans than it wants to, but the thing about MB is that as much as it identifies as a rogue security unit, it really is becoming more human, more emotional and attached as it works with humans. It hates this and it’s hilarious. 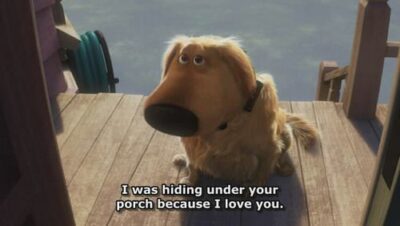 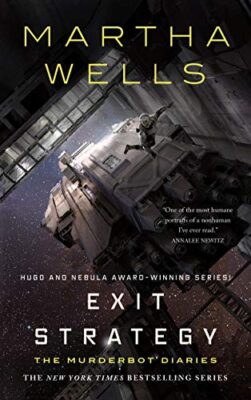 The end of Rogue Protocol was a little bit sad, but I am hoping that in the long run we will see that something good and unexpected results from it. One of the running themes in The Murderbot Diaries is that SecUnits are feared by humans and have a reputation for violence, even though they can only do what humans have programmed them for. Still, the general perception is that SecUnits are to be feared, and now MB’s rogue status has been revealed and hit the news services. In Exit Stratgey, GrayCris, now aware of MB’s activity on Milu and worried about being exposed, has kidnapped Dr. Mensah, believing that she has ordered MB to dig up dirt against them. MB, who has complicated feelings about Dr. Mensah, decides to find Mensah and in doing so, has to go to GrayCris HQ, where MB is reunited with Mensah’s crew from the first Murderbot book. I love this crew and having MB working alongside them again, especially the human hybrid Gurathin (who MB hates) was a lot of fun to read. Exit Strategy has a great shoot-em-up scene at the end, but even better is what happens to MB as a result of it. The book ends with MB perhaps tentatively deciding to trust some humans and realize that there are options out there other than living alone and on the run. I’m very much looking forward to the developing relationship between MB and Mensah as well as figuring out the ultimate mystery of GrayCris shady operations and MB’s violent past.