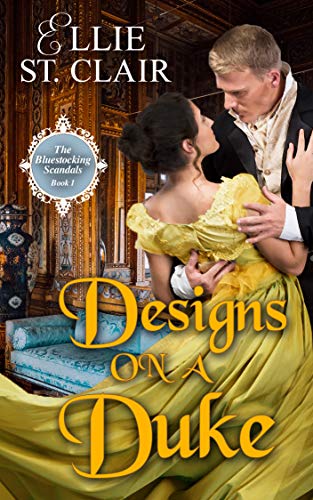 You have to hand it to Sarah MacLean. While she takes romance seriously, her books are fun. The banter is good, the scenarios are imaginative, and the characters are self-aware. I had this realization early in A Rogue By Any Other Name, when, as part of his attempt to kidnap and marry our heroine, the titular rogue spanks her, a move that is equal parts sexy and comical. MacLean is especially good at writing conventional aristocratic women who find themselves plunged into a London underworld, which is the case here, where Lady Penelope is forced to marry her childhood friend-gone-bad, Bourne. Will they fall in love? Is the question even in doubt? It doesn’t really matter that the outcome is predetermined–it is still a fun ride.

Ellie St. Clair captures a similar levity in Designs on a Duke, which revolves around the romance between aspiring architect Rebecca Lambert and the new Duke of Wyndam, whose houses her father is renovating. Like all dukes in Regency romances, apparently, this Duke boxes as a hobby–the only way they can process emotions, I suppose. While I prefer MacLean’s style, Designs on a Duke is still a good read.

Unfortunately, I can’t say the same for Marie Force’s Fatal Affair. It’s just not very fun. I thought at first it was because the novel centers on a murder investigation, but the In Death series illustrates how even a murder mystery can be lightened with side plots, zany characters, and unexpected twists. While I am willing to suspend nearly all of my disbelief in the service of a compelling story, I kept getting sidetracked in Fatal Affair by scenarios that seemed…unlikely (a murder victim’s best friend wandering through various crime scenes and participating in multiple interviews for example). This wasn’t the book for me, but romance is a wide world, and, based on its popularity, this book worked for lots of readers.