> FAQ Home
> Genre: Romance > “Look. I realize you’re a complex individual. But let’s just say that cute’s definitely in there.” 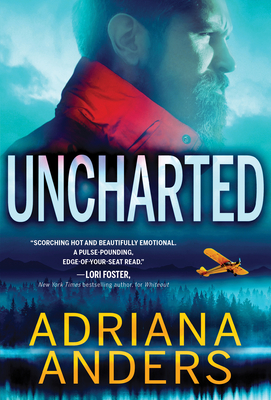 If there is an animal in a suspense book, I spend the whole book worrying. So first off, the dog is fine.

Adriana Anders’ Whiteout was one of my most unexpected favorite reads of last year. The  second book in the Survival Instincts series, Uncharted, continues the overarching story of thwarting Chronos’ quest for genocide and profit. This time, pilot Leo Eddowes and her team are trying to find a scientist hiding in the mountains of Alaska before Chronos finds him. Only a half step ahead of a hostile extraction team, Leo races to find her target. When she is shot down, Ethan Thorne, a reclusive mountain man with a big secret, rescues her.

Though the basic situation is the same, two people racing for their lives through a dangerous wilderness, Uncharted is its own story. Leo loves speed and she loves to fly. She’s been in the military, but now she’s in the private good guy rescue business. Leo is competent and has survival training. But, she also has a headwound and doesn’t know this particular terrain. Ethan Thorne has been in hiding in the Alaskan wilderness for a decade. He knows exactly how bad Chronos is and has been prepared to flee with his dog, Bo, at a moment’s notice. He’s even prepared to haul a woman with a head injury that he doesn’t know if he can trust on the run with him. Leo and Ethan are tremendously competent, but they are injured and on foot in a dangerous wilderness beset by bad weather.

Adriana Anders is walking a tightrope with Leo and Ethan’s romance – they don’t know each other and they don’t trust each other at first. So how do they believably fall in love? Pushed to their physical and emotional limits, Ethan and Leo fall for each other’s sheer competence. They see and appreciate each other in a way that civilians would never understand. The bond they form is deeply emotional and balances out the physical danger they are in.

I can’t wait for the next book.

I received this book as an advance reader copy from NetGalley in exchange for an honest review.