> FAQ Home
> Genre: Children's Books > Their costumes are made of cardboard, but their hearts are made of gold

cbr13bingo Gateway  (This (so far two book) graphic novel series is one that I am not a huge fan of, but I know they are good for today’s readers. They introduce modern subjects (GLBTQ related) but also the classics like bullies and friendship issues. I recommend this to both starting in the genre of graphic novel and one if you’ve been into GNs for a bit). 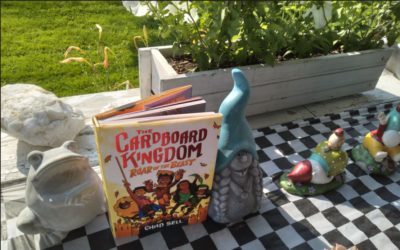 The Cardboard Kingdom V02 Roar of the Beast is: a graphic novel. It is a colorful graphic novel at that. It is a book that has lots of people involved. Chad Sell organized it all for us and put it into book format. Roar of the Beast is the second book in a series. I did not come away OMG BEST BOOK EVER with the first book. The concept was nice: friends, neighbors, siblings, and classmates come together with imagination and creativity to face the trials of growing up. Some kids were non-conforming to gender norms. Some were scared. Some were people of color. Some were bullies. Some had big plans. They were just kids. Yet, it interested me enough to go onto book two.

And I enjoyed book two better than the first. By this time the stage has been set, therefore the authors are focused on the story and not creating the characters as much. Yet, they do grow and come into their selves. When The Teens bully one of the Cardboard Kingdom kids, he not only loses confidence, but he pulls away from his friends. But then The Monster is seen lurking around outside one of the houses. And these friends will stop at nothing to stop it from scaring the neighborhood, causing mischief or terror. In the end, the message of the book is to ask for help, listen and not just talk, speak up when things are wrong, and be a good friend.

Diverse characters help make this graphic novel relatable for ages 8 to 12. The art of Sell is bold, bright, rich coloring and minimal detailed. It all comes together to create a book that is a great way to talk about the subject of friendship and being yourself, but also a fun story.

Other Contributors: Jay Fuller, David DeMeo, Katie Schenkel, Kris Moore, Molly Muldoon, Vid Alliger, Manuel Betancourt    An afterwards gives information about the contributors and a bit of how the book was created.

PS: The frog is Lady Lily Sandybottom, the gnome Jinx, the guy laying down Mr. Redcap and finally Mr. Waverton.