I received an ARC of this book from the author in exchange for a fair and honest review.

The Professor Next Door publishes June 8, 2021.

Jackie Lau’s next book in her Cider Bar Sisters series is The Professor Next Door and it tells the story of Nicole Louie-Edwards and David Cho, the titular professor next door. A decade after getting out of a rough relationship Nicole has herself settled into her career and life with friends and family, building a life around the version of herself she believes she wants. She has sworn off dating, instead enjoying the nightlife and bringing men back to her apartment, but she’s gotten tired of the chase. Nicole’s new neighbor David isn’t really her type (she thinks), but after they get stuck in an elevator together on her birthday, a friendship with the kind geology professor develops. 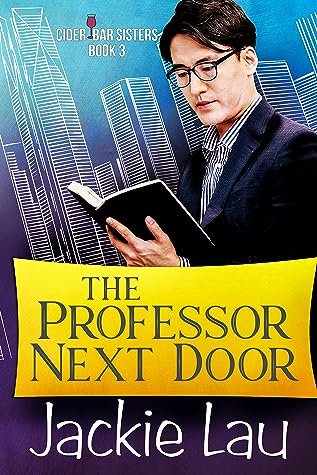 David brings Nicole a cake for her birthday and from there they create a routine of Friday night dinners alternating at each other’s apartments. One night David confesses that he can hear her Nicole having sex through the walls when she brings guys back to her apartment, but that he leaves the room because he isn’t a creep. Nicole notices that it’s clear he’d like to, and they embark on a friends-with-benefits arrangement.  Nicole is amazed what hides behind David’s mild, slightly stern, exterior. As the weeks progress David becomes a bigger part of her life and while he sees a future for them, she’s convinced she’d lose her identity in a relationship, like she did ten years ago.

Lau has a way of writing books that feel like sitting down with a quick snack and a cup of tea, while also making them steamy. I’m all for it. Lau is also building out her universe, The Professor Next Door takes place in the same Baldwin Street neighborhood from The Ultimate Pi Day Party and the bakery Happy as Pie makes an appearance as one of David’s go to dessert locations.

I do love an opposites attract trope, see my current obsession with Roy Kent and Keeley Jones from Ted Lasso) and there is a bit of that here. David is a relationship type, having been previously married, and Nicole does not see the value for herself. She’s got a big personality, he’s more reserved in most things.  But they are compatible in the important ways and find the same things to be of value (kindness, respect, removing toxic people from their lives). I was invested in them and waiting for Nicole to get out of her own way. Because I do have two small complaints – the first being that the hurdles to the relationship were imbalanced. The second is mostly a me problem, I haven’t read the first two books in the series yet and I did feel the gap in reading The Professor Next Door that I didn’t when I read the novella Her Pretend Christmas Date last year. The underlying friendships of the Cider Bar Sisters are important to understanding the interior life of Nicole and that may be why I had a tough time really settling into her character. But the relationships that Lau writes around her characters are great, and Nicole’s grandmother was a standout.