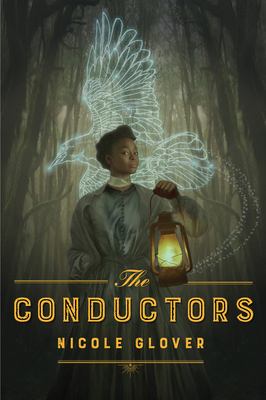 I have wanted this book ever since I saw the cover on Twitter! And it matches the book so well – a strong heroine, lots of magic and an intriguing mystery plot.

“Who are you?” she repeated. Curiosity bloomed in her eyes, overshadowing the fear.
Hetty held out a hand to the girl, much as she’d done many times before, and said, “Someone here to help.”

Hetty and her husband Benjy fell into investigating murders and similar cases because the police aren’t interested in what’s going on in the Black part of the city. When the book starts, they’ve been doing it for five years, so the discovery of a dead body isn’t that much of a big deal for them. But the fact they know this person – and that it’s a person who had shortly before his death asked for Hetty’s help – is unsettling. Hetty’s reluctant to suspect that any of her friends are involved, but Benjy is more pragmatic. Unsure who to trust, Hetty and Benjy must work together to uncover why people they know are being targeted, and how to stop Hetty from being next.

“Although the grisliest of murders occurred in these streets, night or day, Hetty had never fretted. She had her magic and she had her hairpins, not to mention enough common sense to avoid fools.”

Hetty is everything. She’s prickly and a bit judgmental, but that doesn’t stop her from helping everyone she runs into. She’s stubborn and brave, unwilling to give up while there’s still a sliver of a chance. She’s an expert seamstress and storyteller, prone to exaggerating her exploits and spellbinding their listeners. By comparison, Benjy is a blacksmith, big and tall and strong, though he’s really a cinnamon roll inside, not to mention a lover of science fiction novels and someone who prefers to think carefully and analytically about problems before jumping in to them – unlike Hetty. While they’re married, it was a marriage of a convenience since they worked as conductors on the Underground Railroad together, and figured marrying would explain why they were together so often. There’s a minor romantic subplot, as Hetty is horrified to realize she’s actually developing feelings for her husband, feelings which she doesn’t believe are returned.

“Some things are as hard to escape,” Hetty said, “as they are to forget.”
“Much like people. Sometimes you think them lost and then they show up when least expected.”

The book doesn’t shy away from the realities of being a former slave in post-Civil War Philadelphia. Hetty’s well aware that the end of the war has changed some things, but not enough. But if she wants the world to change, she knows she has to do it herself – who else will? Even five years after the end of the war, Hetty and Benjy are still trying to find their place. Free Black people, while they’re quick to ask for help or to laud them for their past work as conductors, don’t care to actually socialize with them. Their friends, mostly people they themselves rescued, are moving on without them, doing their best to ingratiate themselves with that society. Hetty is still somewhat trapped in the past, focused on finding her sister, Esther, who she was separated from during their escape. Her guilt won’t let her move on completely, and it affects her relationships with both Benjy and her friends.

“A story is a living creature, and they need a personal touch to live on. You breathe in your woes, your loves, your troubles, and eventually they become something new. They aren’t the books you love so much. Stories change with the tellers.”

The book is told solely from Hetty’s POV, which worked well for me. While most of the story occurs after the war, there’s a few interludes of pre-war and during-the-war events in Hetty’s life, which mainly added necessary details about her relationship with Benjy, her sister, and some of the runaways they helped. With that being said, it’s very slowly paced and sometimes a bit meandering, though overall I loved the mystery. There’s a lot going on, and initially it seems like Hetty is being pulled every which way trying to solve multiple unrelated cases. How – and if – those cases are connected kept me stumped for quite a bit. One of the other things that took my mind off the pacing was the side characters, especially Darlene and Penelope and her circus of cousins. In a much appreciated touch, there’s a few queer characters, including a trans man and a gay couple.

“I wanted him part of every story that could be told of my life,” Hetty admitted, “and these feelings ruin things.”

I absolutely adored the Celestial magic, but I wish more of it had been explained. There’s a bunch of sigils based on constellations – I think Virgo was my favorite – and Hetty stacks the deck by sewing the sigils into her clothing, including a band around her neck she wears to hide the scars from a magically activated slave collar. White people have their own form of magic, Sorcery, that uses a wand, and it’s illegal for Black people to possess or use a wand. While we see Hetty and others using that magic, it’s more of a “she used such-and-such constellation to light the lamp” with no other explanation about why she’d use that one.

Overall, I very much enjoyed this debut novel, and I’m looking forward to seeing where the next in the series picks up.