> FAQ Home
> Genre: Fiction > How to walk away from a writer 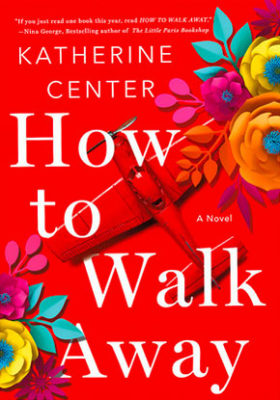 I generally try to give an author a couple of books before I put them on my Never Buy list. This makes 2 books from Katherine Center and she is officially on that list forever. I saw hints of problematic white feminism centring on a selfish Beckie who thinks she’s a gift to the world simply by existing in Happiness for Beginners. Those elements are that much more present in this novel.

Plot: Becky (her actual name is Margaret) has never had an independent thought in her life. She has pursued a career because her manipulative Karen mother told her to, and seemingly pursued a boyfriend solely because he was her mom’s best friend’s son. Said garbage boyfriend forces her onto a small plane even though she’s scared of airplanes and he doesn’t have his certification, there’s a storm, the plane crashes and she suffers a serious spinal cord injury. The book follows her recovery.

There are some really great things in this book. The writing is very strong. The author clearly spent a lot of time researching to capture the details of the flight, of medical jargon, of the emotional journey a person takes through recovery, and so on.

Unfortunately that made the gaps all the more obvious. Much like in Happiness for Beginners, Becky has no depth of character or personality. She is STUNNED at the idea of HELPING OTHERS. She is in almost every instance a passenger in her own life. Yet her character arc doesn’t resolve towards a caring, emotionally intelligent person braving the world on her own. Even towards the end of the book she is siding with her manipulative mother in keeping a life changing secret from her father, a secret he has every right to know.

And let’s talk about the racism in this book. Center seems to have a special fixation with culturally appropriating Indigenous culture. Becky fixates on her heritage, spending many paragraphs talking about it, but the way she talks about it is weird. She has mixed European heritage, as she says frequently, as most Americans do, only that in Texas where she has lived her whole life, only 40% of Americans identify as a white person of any non- Latinx background. But sure, let’s fixate on how the majority of Americans (may) trace their roots back to Europe and not question that a good part of that is because of the millions of Indigenous people that were murdered during colonization. In fact, Becky has a little bit of Huron in her, so it’s okay. Only that she doesn’t, it’s a stupid lie given all of a couple of lines to shrug off.

Her fixation with her heritage would suggest, one might think, in some specific pride in that heritage. Her father, for example, is deeply deeply proud of his background (I want to say Norwegian but I’ve already forgotten so don’t quote me on it). Do they do anything to celebrate Norwegian heritage? No? How about the French or German she mentioned having? No, they are just generic white people who do generic white people things like buying a canoe and painting it up with “Cherokee art”?

My favourite part of the story is a scene at Becky’s family lake cabin. She goes there to recover and goes on a ride around the lake to contemplate in the “Cherokee art” painted canoe. So she takes this Indigenous invention covered with appropriated Indigenous art and thinks about how amazing it was that her grandparents were the first people on this lake. Sure they were.

Here’s the thing about white supremacy. Sure, you have the George Floyd or Eric Garner or Sandra Bland whose treatment is obviously, horrifically unfair, but white supremacy’s most prolific weapon is the normalization of whiteness as default. The whitewashing of history. This narrative of Nice White People just find Indigenous art pretty without caring about its history, who take “pride” in a heritage they have no connection to beyond the colour of their skin (which is a choice, unlike for most Black people in the west who had their heritage stolen from them or Indigenous people who had to erase their heritage to survive) is necessary to allow them to disconnect from the conduct of violent white supremacists and systemic discrimination because they personally are not out lynching people. Books like this give white people permission not to care about their complicity in a system that dehumanizes people based on accidents of birth, even when their conduct actively contributes to that system, and they are dangerous.

And to add insult to injury, there is also constant fat shaming. There is literally a character called “Fat Benjamin” but it’s cool because “he doesn’t mind.”

Miss me with this shit.