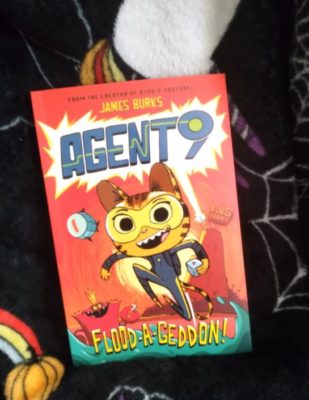 Agent 9: Flood-A-Geddon! would make a great Nickelodeon like cartoon super spy story. There is adventure with silly characters, funky fun illustrations, a relatable narrator (who might be a bit annoying to the adult viewer/reader at times) and is overall a good time. James Burks authors and illustrates this graphic novel. I am not sure if it is book one in a series (it reads both as a first and second book in a series) but reads as if more is to come.

And not only is there entertainment, but there is also GASP! a message for our main character, Agent 9. And unlike some messages that are subtle, and one is not always aware of it, this one is obviously stated, and the main character learns it (whether they will practice it in the future is another question, but they learn it for Flood-A-Geddon!). I admit, I was not sure they were going to really understand/learn the message. Which is: look before you leap. Literally sometimes. But always metaphorically. Also, finish what you start. Do not leave your super spy, super motorcycle only half repaired. You should read the whole email and not just part of it. And Agent 9 has a habit of not learning from their mistakes until it is almost too late. However, when the broken waffle iron is down, they step up to defeat King Crab (who by the way looks like they stepped out of a Sponge Bob episode). And no that was not a spoiler, this book is a straightforward as it gets: “Good Guys = good” and will win and “Bad Guys = bad” and will lose.

There is much kid humor, minimal detail to the illustrations, but are also full pages with what details they have and of course the bold, deep colors will pleasantly assault the eyes. The only part of this book that is slightly different (as it is text-book kid graphic novel story) is that the main character, Agent 9, is modern as they probably could get as they are not gendered. The reading is easy for the adult and just right for the early or reluctant reader.