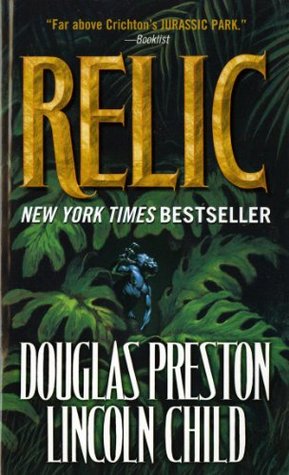 The idea of this book is just so fantastical.  There’s a beast killing people in the Museum of Natural History in NYC.  Like come on.  But it totally works (at least for me)!  I read this book because I love Douglas Preston.  He made me scared of bats in the wild and bleeding through my eyes (reasonable fears I think).

This is apparently the debut novel for the Pendergast series.  I had no idea it existed, but I’m so glad I found it.  I have a bunch of Lincoln Child books on my bookshelves, but I don’t think I’ve ever read any of them.  I’m not entirely sure where they came from either!

Even though there were two authors, I never got the feeling that it was written by two people.  To me that’s a feat in and of itself.

Anyway, back to the book.  There’s a “museum beast” ripping people apart in the museum.  There’s also a big opening for a new exhibit at the museum.  Characters clash.  People get senselessly murdered in gruesome ways.  I loved it.

There’s a whole mythical component to the story too.  I’m making it sound super boring, but that’s because I’m tired!  Sorry!  Just a note – two dogs do not make it out of this book alive.  You’ll know when to skip ahead a few pages if that’s a thing that bothers you.  It sure bothers me.  Everything else was super enjoyable though.  I mean enjoyable in that I was scared and couldn’t stop reading people get murdered and other people try to figure out what the hell was happening!

I’m excited to read more of the Special Agent Pendergast books.  My library doesn’t have the 2nd one, so I may have to actually purchase a book!  I’ve been subsisting on ebooks from my library (while also donating to them during this crisis) and my Kindle Unlimited membership.  I’ve actually been thinking about trying to donate ebooks I’ve bought to my library for their digital collection.  I’m not sure that’s a thing though?