> FAQ Home
> Genre: Fiction > I read Killing Eve so you don’t have to 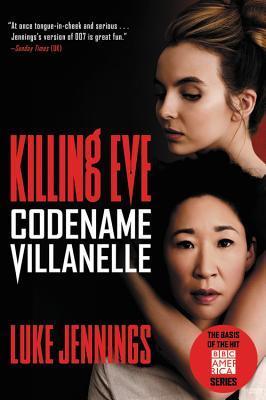 A few months ago I finally gave in and watched season 1 of Killing Eve, and I really enjoyed it. Something about Villanelle and Eve’s twisted obsessive relationship was fascinating to me. I’m not caught up to the series, but when the book showed up on an Audible deal, I snatched it up and thought I was in for a fun ride.

Turns out, not quite so.

Here’s the thing: Codename Villanelle was not originally a novel (which I didn’t discover until after I finished the audiobook), but a collection of 4 novellas which were grouped together in 2018. After the success of the TV show, the author decided to cash in and then started writing sequels which actually diverge from the show.

As a collection of spy/detective novellas it is fine, I guess. But it doesn’t really work as a novel because you lack the overarching cohesive narrative. You keep getting re-introduced to the characters and I was so confused. If I had gone in with the different expectation, I might have enjoyed it more.

The underlying story is mostly similar, though different chronologically. The first story tell us the story of Villanelle – no Eve yet -, and how she has come to be an assassin. Sociopath girl who eventually gets arrested and offered the job and lots of money and clothes. I warn that the whole thing doesn’t make too much sense, so if you plan on reading it, remember to turn off your brain.

The second story introduces Eve, who works for MI-6 and who is tasked with protecting a crazy radical Russian professor. Villanelle kills him and all of a sudden Eve is on to this female serial killer. The third story takes place in Shanghai for reasons I cannot explain to you. Villanelle kills another guy and Eve goes there with a colleague. In the fourth one Eve is looking for revenge over Simon’s murder, and Villanelle is on a rescue mission for her handler and none of it seems to be connected for makes any sense.

All of it is unexplainably boring somehow. I can’t explain why. I normally love audiobooks – my attention rarely wavers. But for this book, I kept having to rewind because my mind kept wandering off and thinking of other things.

All in all, I few things really irked me:

As much as I generally prefer the books behind the movies, in this case the TV show is far superior to the source material. I honestly applaud the BBC America showrunner and writers and cast and crew – what they managed to do it nothing short of astounding.