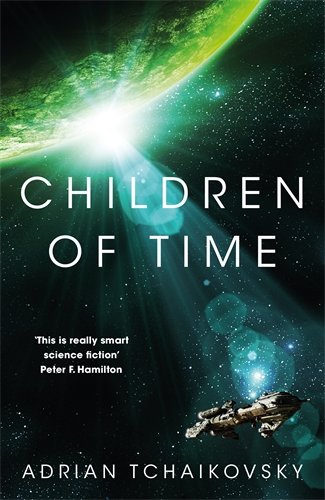 I was raised on the optimistic technology sci fi of Arthur C. Clarke who believed our future was in the stars and that technology was our only way there. But he often threaded his optimism with warning of our hubris and innate inability to understand a mind truly alien to ours. I’ve waited to read a successor that expanded on these twin stars of hope and wariness. Children of Time succeeds and then carries it into realms I couldn’t conceive, ones I can’t even fully understand but, with Adrain’s Tchaikovsky’s talent, I appreciate and begin to grasp.

At its heart, it’s a story of hope. But we don’t know that until the very end and after a very stressful story which feels like it will end in the same bleak destruction written into humanity’s dna from the story’s beginning. I tell you this because the story is one hell of a ride and Tchaikovsky does not give too much away, not out of desire for a surprise ending, but because the evolution of intelligence is not a forgone conclusion. And if hope is the heart, then the cold science of evolution, which so often ends in death, is the seemingly odd structure to house this heart. But it works.

Humans, having destroyed their home world, look to terraform other planets into possible homes for the remnants of our species. That’s the plan but humans are terrible at remaining in control of anything we unleash. Looked at objectively, the results are…humorous but not in a laugh out loud way more like in a oh of course because we are idiots way. But the author isn’t cruel just someone who has obviously spent a lot of time looking at non human sentience.

Look, this is a book about humans and…spiders, specifically portiid spiders which are the ones that jump. For arachnophobes, this book could be a challenge. I never found it creepy because Tchaikovsky never tries to creep you out and make you scared of spiders. On the contrary, this man is definitely trying to build bridges between species. Along the way, misunderstandings both within our species, within the spiders’ and definitely between us, threatens to blow everything up.

Anyone who loves evolutionary theory, loves stories that don’t cater to a human centric view of the universe, will love this book. This author is probably smarter than most who will read this book but he never comes across as arrogant. Patience and understanding are his philosophy. Though I sweated throughout this book, the reward was more than worth it. If you make it to the end you will be granted an UNDERSTANDING (that’s a pun someone who’s read it will get). As with the Humans and Spiders, the understanding the reader gets elevates them into a new future of hope. Highly recommend