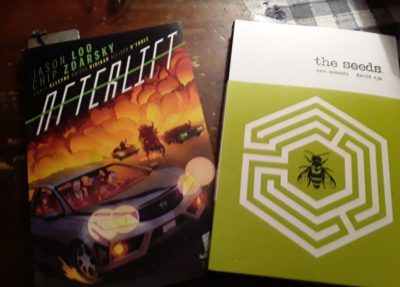 The Seeds is WARPED!  I was reading it a few nights ago and texting to a friend about it. I told them at that point (a handful of pages in), we had destroyed Earth to the point where much of the population has left the technology side of the city and gone “back to basics.” Yet, this is no lovefest, happy back-to-nature world. Just lie the technology side is just horrible as any dystopian world could be, it is pig-eat-pig world out there. On the technology side, there is a night club that serves a drug, that once you take it, you will learn how you will die. This world is about death, it is corrupt, disillusioned, and neither is a nice place to be.

We have three main characters. One is a reporter that works for a trash rag but wants to be a real reporter. Not one that has a boss that tells her to bring the pictures and she’ll supply the story. Astra, wants truth, not “if you tell a lie long enough 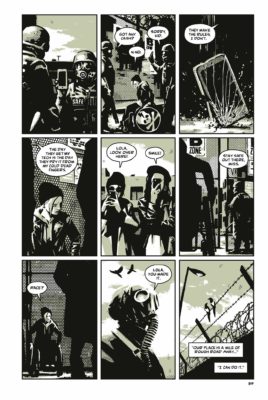 it becomes truth.,” And to try and find a real story, she bribes (with money from her newspaper) the guards at the wall that separates the two worlds and takes technology to the other side. All because she thought she saw something on her side of the wall that was literally out of this world.

We also have Lola. She lives on the tech side of things. Even if her phone is in her hand, she shakes. She needs that drug as much as any physical one she has taken. She is in love with a man that we see only standing there, talking to her (as she is half naked, peeing) wearing an old school gas mask. He is a collector we learn. Of what we are not sure of until later; when we see he collects seeds. But also, he and his companions (we meet on the other side of the wall) have some interesting idea what “seeds” mean.

He is the third main character, and his world is one that maybe we should have seen coming, but never believed it could ever be true. His world is dark, cruel, and probably more human than they want to admit.

The books has sex, drugs, a pig killed (non-tech side), humanity threatened six ways from Sunday, and I have no clue what was going on. At the earliest part of reading, I thought it was the most amazing thing in the world, or the biggest piece of crap ever. The funny part was, I had read a few pages of it in a teaser promotional email from the publisher. And yes, it sounded odd, but kinda cool, but not like it was going to be LSD on a heroin trip!

I repeat, THIS BOOK IS WARPED. Ann Nocenti created something that is out somewhere in left field. On Mars! The ins and outs; the ups and downs make you dizzy. I honestly cannot tell you if I like this or not. I think I did. But I am not sure. It is convoluted and straight forward. And not something easily digested while reading. It takes time to understand what is going on. If you ever do.

The illustrations by David Aja are ugly, beautiful. Incomprehensible and tell you everything you need to know. They are black and white, dark, crowded, dirty, sometimes in focus, sometimes not. What is real, made up or sometimes both, comes to life and assault your eyes.

Still, I feel that everyone will get a different message. There is the “On Surface” and there is “Below Surface”… stuff. Maybe this is a “no hope” story. Maybe there is hope. Or maybe it is both. And it is up to reader to find out what it is all about. Not a quick or one time read. It is a screwed up, wonderful, horrible, grand mess. 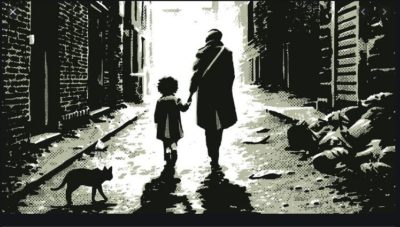