> FAQ Home
> Genre: Fiction > It makes sense that my US History teacher would love this book so much 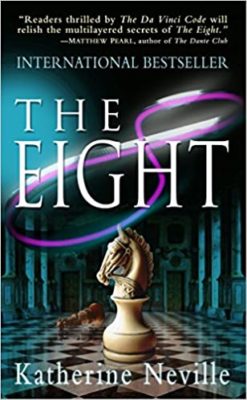 One of the last things I did before graduating high school in 2009 was to ask all my favorite teachers what their favorite novels were. My US History teacher said that the book she goes back to over and over is The Eight by Katherine Neville. This book has been on my TBR list since then but I have never gotten around to reading it. I can finally take it off that list.

This book is expansive. From 18th Century nuns to 20th computer experts, from Russia to America, from Talleyrand to Muammar Gaddafi, the book covers it all. It is awe-inspiring that the author Katherine Neville was able to weave so much together. There are two primary story lines throughout the book both centered around a fabled chess set named the Montglane Service which is rumored to have mysterious and fantastic powers. One story line follows a novice nun Mirelle as she attempts to protect the pieces of the Montglane Service less they fall into the hands of terrible and power-hungry men. Her story is set against the backdrop of the French Revolution and world wobbling on its axis. Power is shifting around the world, and Mirelle is caught in the middle of those shifts. The second story line follows Cat, a computer technician assigned to a fledgling OPEC minister in Algeria. Cat is thrown into a game already in progress but must work with friends and strangers alike to find and protect the pieces of the Service.

The book regularly shifts between these two stories to mildly interesting effect. Oftentimes, the shift occurred just as one story was really building up steam. Additionally this book is one of stories. And stories within stories. One character will tell a story in which another story is told. There are Inception-levels that made following the main plot challenging.

Neville does do a great job in The Eight of building mystery. The pacing at which each piece of the puzzle was revealed ultimately kept me interested. I do think the book was a little long and some could have been cut, but overall, I wanted to know how things worked out. The ending and final reveal made the entire book worth it. For all the building and expanding that Neville did throughout the novel, she managed to tie things up nicely.

I am very thankful that I listened to an audiobook version of this novel. The voice actor was phenomenal. She was a pro at accents which helped differentiate the numerous characters. She had a French, Algerian, American, and Russian accent, masculine and feminine, locked and loaded. And because so many of the names and places were foreign, it was great to hear how they should be pronounced. Otherwise I would have fumbled through a lot of it.