> FAQ Home
> Genre: Fantasy > I was prepared to eye-roll through this entire thing– I couldn’t put it down though 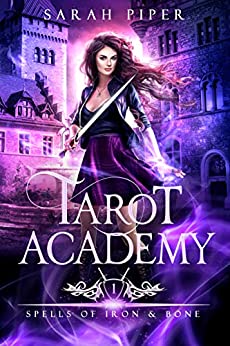 Magic is real, and the world knows it. Unfortunately for the witches and mages, magick is also illegal, and Stevie just performed powerful magick on a non-magical person. Powerful enough that he died. Stevie must now go into hiding at the magical academy that previously threw out her parents for their heretical views. When she arrives at the academy she starts her journey to master her magick (which is largely based on the Tarot) in order to complete the work that her mother started and ultimately prevent a magical apocalypse. Aiding her journey are four mysterious and handsome men who seem to know more than they are letting on.

I was prepared to not like this book at all. Based on the cover and the Amazon description, I was ready to eye-roll my way through every part of this book, but I ended up liking it. It’s not ground-breaking by any means, but the magical system developed off the Tarot was refreshingly unique. The author, Sarah Piper, spends a decent amount of time explaining the Tarot and the magical system at work which I greatly appreciated. It is completely a bog on the main plot, but I thoroughly enjoyed the inventiveness.

The characters themselves are largely superficial. Stevie starts off as a self-assured, self-aware young woman who cares about many things including sex. Towards the middle of the book, Stevie completely and solely focuses on sex (specifically sex with the aforementioned mystery men). While I have no qualms with a woman enjoying, thinking about, engaging in sex, it was disappointing to see a complex character be whittled down. She eventually finds her way towards the end though.

As for plot, this book very much feels like set-up for future books in the series. Not a lot happens to further the plot at large until the final 10% of the book, and even then, this book raises more questions than it answers. Admittedly though, I will be picking up the other installations in the series.