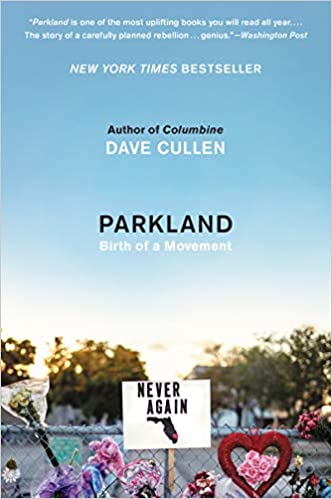 On February 14, 2018, a gunman killed 17 people at Marjory Stoneman Douglas high school in Florida. This book is not about that day, it is not a painstaking retelling of the traumas suffered by those who survived and those who did not. It is about what sprung from that day, a movement propelled by hope and grief and a determination that it never happen again. A movement run by kids.

Almost immediately in the aftermath of the shooting these kids got together to do…something. Anything. They were all over the media, trending on twitter, calling BS on TV, demanding change. Time was against them. They new the news cycle would forget them and move on quickly, as it always did when these massacres happened. Four days after the shooting they announced the March For Our Lives, an ambitious event that went on to be the fourth largest protest in American history. They pulled the eye of the news cameras to them time and time again to keep the conversation going. They wanted sensible gun law reform and they wanted it now. And people were finally going to listen.

Dave Cullen (author of the excellent Columbine) follows the students on their journey, through smaller protest marches and events as they learned the ropes, to the large scale March For Our Lives. He delves into how they organised themselves, who were the key people to get things moving, how they stayed as one in their messaging, how they coped with their trauma and grief, as well as friendships that disintegrated and trying to stay on top of school/college while their time was eaten up by their main focus.

I am glad this wasn’t a deep dive into the shooting itself and that a choice was made to not even name the gunman. I’m hoping it marks a move away from the perpetrator being the one whose name we all remember. I enjoyed getting to know the kids a bit better and am also kind of in awe of them. They took so much onto their young shoulders and didn’t give up. It would be nice if the book could end with a bit more progress on the gun law reform debate in the US, but given the state of the country and its leadership at the moment it’s not surprising that things aren’t moving at speed. And the kids talk about how they’re prepared for this to be a long haul. I wish that wasn’t the case, but it does end hopefully, or as hopefully as it can given the subject matter, with the kids keeping on. Because what else is there to do, give up? Not on their watch.