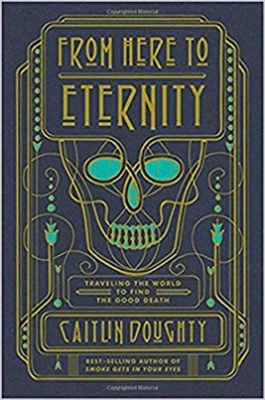 Do you have a plan for what happens when you die? What do you want to happen to your mortal remains? My husband wants his ashes packed into a cannon and used to set off a controlled avalanche- preferably over a miniature village- so that he can “take something out with [him]” when he goes. I am not sold entirely on my end yet; I had an idea involving fireworks before I started reading this delightful book, but now the door has been opened to plenty of other ideas and I’m a kid in a macabre candy store. One thing is for certain: I do NOT want to be embalmed and placed in a multi-thousand dollar box and left to take up space in a cemetery somewhere. The funeral industry is rife with predatory practices, myths presented as truths, and impersonal methods. While this book is often critical of the modern funeral industry, it is never condescending towards those who do want to be laid to rest through a funeral home and all of it’s (fairly recent and mostly Western) traditions.

From Here to Eternity reads like a long-form article, and that is not a complaint or detraction in the slightest! This was a one-day read; I was immediately enthralled. Caitlin Doughty is knowledgeable, compassionate, curious, and funny- all traits that you want to see in the person that will help you or your loved ones move from this world to the next; regardless of what you believe happens (or does not happen) once you cease to be alive (in the traditional sense, at least).

This is a collection of beliefs, traditions, new ideas, and ancient rituals woven together to form a world-wide blanket of caring for the dead. Doughty traveled all over the world, meeting both the living and the dead, as an avid observer and student. She asks thoughtful questions, gives clear insight, and is obviously excited to be allowed entrance into the cultures and traditions that let her in.

I was struck by how frequently the role of women in the world of death was focused upon; for a very long time death happened and was handled at home- bodies and services were prepared and cared for by women. Over time, industry and religion (there is a good deal of conversation regarding the role of the Catholic church- especially around indigenous women in Bolivia- but Eastern religions are spoken to as well) have removed the power of a woman from both the services and from her own body. Women are frequently now leading the charge in overhauling the way that we handle (both physically and emotionally) our dead.  While speaking on recomposition- a practice being tested and tried here in America involving literally composting human remains back to the dirt from whence they came- Doughty notes “the main players in the recomposition project are women- scientists, anthropologists, lawyers, architects. Educated women, who have privilege to devote their efforts to righting a wrong. They’ve given prominent space in their professional careers to changing the current system of death”. Women are taking back the reins on not just what happens to our bodies in life, but also what happens to our bodies after death. She continues, “Women’s bodies are so often under the purview of men, whether it’s our reproductive organs, our sexuality, our weight, our manner of dress. There is freedom found in decomposition, a body rendered messy, chaotic and wild”.

What do I want to happen to me when I die? We’ll see- I have much more reading to do!

Also- how lovely is that cover?! There is also beautiful (and creepy) art throughout the book, created by the illustrator Landis Blair.