Why this all began,  Tsubasa: Reservoir Chronicles read through.

Volume 14 – The volume opens with Yuko and Fei-Wang Reed throwing verbal barbs at one another while magically communicating across dimensions.  In Recort, Syaoran and Kurogane discuss the discovery that the people who killed Kurogane’s mother and attacked Syaoran’s country are from the same dimension.  This adds a new reason to keep dimension hopping.

Sakura and Fai have been investigating and learned that the book that allowed Syaoran to see Kurogane’s memory is literally called, ‘the memory book’.  The symbol on the book looks suspiciously like the symbol on Sakura’s feathers.  The book they encountered was a copy.  The original is in the central library and they suspect that it might contain the feather.

Upon arriving at the central library, the group discovers that the original memory book has been declared a national treasure, and as several attempts have been made over the years to steal it, the book is no longer view-able by the public.  As they cannot easily access the book to extract the feather, they create a plan to steal it.  Using Mokona’s ability to sense the feather they find a hidden door that leads to the feather.  They are almost instantly attacked by library guardians.  During the fighting, Kurogane notices, again, someone else looking out from Syaoran’s eyes.  They retrieve the feather but find themselves unable to teleport.  Fai uses a whistling magic to nullify the effect and allow them to escape, arousing suspicions as Fai previously has said he wouldn’t use magic.  In the new dimension, the group find themselves in a ruined city, with acid rain falling. They rush to cover, in a mostly intact building, only to be confronted by a gang. 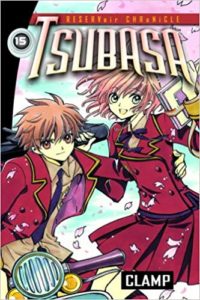 Volume 15 – The gang is part of a larger group that live together and protect a shared pure water source.  Their building is protected by some magical power.  Kamui, the leader, battles Kurogane, and it becomes apparent that he is more than he seems.  The fight is interrupted when a rival gang comes to attempt a raid for water.  Once the rivals leave, Syaoran and company are reluctantly welcomed to stay.

Sakura is still unconscious from absorbing her feather, Syaoran has fallen asleep, worn out from fighting and running.  Kurogane uses this time to interrogate Fai about his magic use.  Fai has been on the run since before the group formed.  He has used his lucky go demeanor to deflect anyone getting close to him.  However, Fai, doesn’t want any one to suffer the consequences of being involved with him and thus used magic to save everyone.

In another dimension, the ‘Syaoran’ look-a-like breaks free and seems to connect with Syaoran.  For a flash both Kurogane and Fai notice the change, and then Syaoran is back.  Fai and Syaoran go on a hunting mission and learn about the mysterious appearance of Kamui, three years ago. During the conversation, Syaoran notices a break in his memory.  Kurogane stays to watch over the sleeping Sakura.  Other ‘Syaoran’ is sent to Yuko, the Space Time Witch, in a bid by a cohort of Fei-Wang Reed to disrupt the proceedings.  Yuko can only grant wishes and ‘Syaoran’ wishes to be sent to his right eye, so she sends him.  In her dreams, Sakura finds herself in the water and speaking with a voice in the depths.  However, her body stops breathing as her soul has fallen asleep. 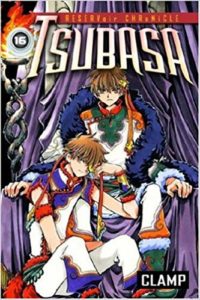 Volume 16 – Returning from hunting, Mokona senses the power of the feather in the water below the building.  Kamui tried to interact with Sakura in the depths of the water but realizes it is her soul, not her body.  Sakura’s feather appears and is absorbed into her.  Instantly the magical ward protecting the building from the acid rain vanishes.  Syaoran jumps into the water and begins fighting Kamui.  Kamui realizes that Syaoran was taught the fighting style of Seishiro-san, his enemy.  Dealing Syaoran a nasty blow and then turning away, Kamui begs someone called Subaru to wake up so they can transfer worlds again to evade Seishiro-san.  Syaoran steps back up and Kamui realizes it is someone different.  Fai dives into the water to find Syaoran holding Kamui in a lock positions, quickly realizing it’s not his Syaoran.  Fai psychically attempts to get Sakura to wake up and verbally spars with Kamui.

Yuko and Fei-Wang Reed are separately watching events unfold.  Yuko observes that the seal in Syaoran’s right eye (the false eye) is breaking.  Fei-Wang acknowledges that the Syaoran, that has been traveling with Sakura, is a man-made copy that was designed to stop at nothing to retrieve Sakura’s feathers.  Before being sealed away, the original Syaoran transferred a tiny piece of his soul to the copy.  Fei-Wang carefully took the copy and placed on a path that would lead to Princess Sakura and the ruins of Clow.  In placing part of himself in the copy, Syaoran hoped that the copy would have been able to grow his own heart, so that when his seal would break, he would be a whole person and not just a tool that had been created with a single purpose, and lack a conscious, to achieve that goal.  The timing was not right and now there is a “good” Syaoran, the original who had been trapped, and the now amoral, “bad” copy.

Copy Syaoran (C-Syaoran) appraises the situation and decides he needs to be more powerful to escape Kamui and continue on his quest.  He has determined that the source of Fai’s magic is his eyes, and steals one to gain Fai’s magical powers.  C-Syaoran and Fai emerge from the water and Kurogane is horrified by what he sees and then Original Syaoran (O-Syaoran) suddenly appears.  O-Syaoran knew that if the copy ‘awoke’ without having grown his own heart, O-Syaoran would have to destroy him.  Sakura awakes and is horrified to see the two Syaorans fighting.  There was one more feather in the depths of the water, C-Syaoran retrieves it gives it to Sakura (making her fall unconscious again), opens a portal, promises that he will return all of Sakura’s feathers before disappearing.

Yuko appears through magic to informs Kurogane that the Syaoran before him is the original, and the man who held him captive is the same responsible for the murder of Kurogane’s mother.  Having lost an eye, Fai is in dire straits.  He expresses a desire to die so that C-Syaoran won’t have access to Fai’s magic through his eye.  Fai is ready to sacrifice himself but Kurogane refuses to believe that his death is necessary.  Yuko admits there is a way to save Fai and the issue ends on that note.