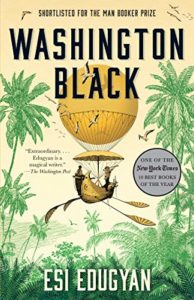 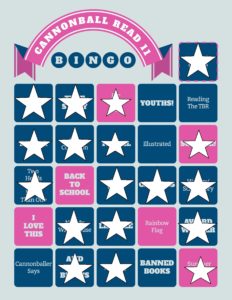 I am really happy I made my first Bingo with this book, because I loved it. This book is so damn good I”m having trouble figuring out what to say other than, this book is so great! You should read it!

George Washington Black is a slave on the Faith Plantation in Barbados. He lives in a shack with Big Kit and works in the sugar fields. When the plantation owner dies, his cousin Erasmus Wilde takes over and an already pretty horrific life becomes even worse. While Mr. Black was a tough owner and his overseers were strict, the overseers Mr. Wilde brings in are basically sadistic and he isn’t much better.

One evening, he is chosen to be the manservant for Christopher Wilde, or Titch as he’s called, Erasmus’s younger brother. This terrifies Wash at first, this kind of appointment isn’t necessarily a good thing. It turns out, though that Titch is nothing like his brother. He is a scientist, and he needs Wash to act as his assistant in his goal to build a Cloud Cutter, a navigable hydrogen powered baloon. Over time, a bond grows between the two and Titch teaches Wash to read and do basic math so he can better assist him and Wash discovers an innate talent for drawing.

Sad news regarding the Senior Mr. Wilde’s death and a tragedy involving the Wilde’s cousin results in a bounty on Wash’s head. He and Titch flee the plantation in the Cloud Cutter, and from there Wash’s life will never be the same again. From Barbados, to Virginia, the Arctic, Nova Scotia and beyond Wash’s life, while not easy in any sense of the word, is very different from what he would have expected by remaining on the plantation. Even while spending most of his life looking over his shoulder for the slave catcher who advertised the bounty on his head, Wash moves forward and makes his way in the world.

Man, I went into this book mostly blind, and it makes me not want to give away any more than I have. This book is so good, and a big part of it for me was finding out the next step along with Wash. The author handles this boy’s life so well, I flew through this book. It’s a tricky thing, talking about the realities of slavery and life as a slave. She handles it deftly, without flinching or minimizing, but also without turning into some kind of torture porn or subsuming the human aspects of the slaves by focusing on their pain. They are real people, and while their lives are surrounded by pain and violence, they still care for each other, or dislike each other, and all the other feelings and situations that all humans have. She also doesn’t shy away from what living through that does to a person, even after they get out of it.

This is the Other Voices center square on my Bingo card.