> FAQ Home
> Genre: Fiction > It was a dull and boring night… 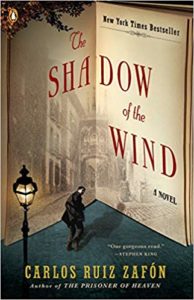 As a 10-year-old, Daniel Sempere visits a mysterious place called the ‘Cemetery of Forgotten Books’ and chooses a book by the unknown author Julián Carax. Over the years, he tries to find out more about him, only to discover that someone is searching for all of Carax’ books just to burn them, and that he himself may possess one of the last copies.

This is supposed to be a gothic novel full of doomed romance, tragedy, and mystery, but in the end, it is mostly an anaemic disappointment. The characters are caricatures of themselves; the bad guy, for instance, is a bogeyman with a shoddy backstory, but without any single facet except irredeemable evilness. The hero’s sidekick, on the other hand, is a leering know-it-all who is obsessed with breasts and embodies the novel’s openly displayed male chauvinism which may have been typical for the time it takes place in, but is not only exaggerated in a gross way but also presented as harmless fun by attaching it to a character the audience is frequently forced to sympathize with.

The plot is overly complicated because the author tries so hard to connect Daniel’s story to the plot of Carax’ book that it makes no sense in some places and only feels contrived in others. The language is too flowery and cliché-riddled which is even more grating when the book is too long as it is. There are some absolutely unnecessary tangents it goes on that just add more volume to the bloated mess it already is. This is on prominent display at the end, or should I say ends, because there are three of them, and Zafón really should have stopped at the first one. By the third, I was ready to rip my hair out in frustration at his utter inability to wrap it up.

There’s really not much good I can say about the book because a lot of it was just either stupid or shallow. Although it started reasonably strong and pulled me in quite quickly despite some red flags already being there, it took such a nose-dive in the second half that I dislike it even more for managing to fool me in the beginning. Only recommended to those who like tragic love affairs that are not romantic, who enjoy gothic stories that are not scary, and who can relate to men who only see a pair of breasts when they look at a woman.