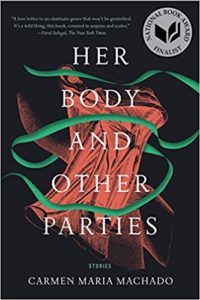 This is a great short story collection. I found it randomly in my local used book store and since picking it up I’ve seen in on all kinds of “best of” lists, which is great, because this book is great.

As with most short story collections I pick up I read it over a bit of time and not all in one go. I like to use short story collections as palate cleansers while reading other books, so it’ll take me a while to finish one, even if I really like it. This being the case, my memory on the last half of the book is going to be way more precise than the first half, since I started this book around the beginning of July and finished it about three days ago. That said, I loved this book, Machado is great, and has such a varied way of storytelling, I hope there is another collection int he near future. Her voice is very feminine, it was very clear this was a woman’s writing, though I don’t think this is in any way a “women’s book.” A lot of the themes and topics are universal, but they are definitely being expressed from the female standpoint, which is really very refreshing.  Her take on the “Girl with the neck ribbon” urban legend in “The Husband Stitch” is a great example of this. I kept thinking I new where it was going  but then, I really didn’t. At the same time it’s also a great example of what I mean about her female perspecitve. We see a teenager falling in love, and how that love turns into a life, but it isn’t a dude writing about a teenage girl, or even a woman trying to make a teenage girl’s lust palatable. It’s the real thing, unadulterated, uncurated, raw. Explicit, but not porn-ish.  I loved it.

I also think there is a certain simplicity to a lot of her prose, especially the more sci-fi based stories, that reminds me a lot of Bradbury, that trick of using the mundane and everyday to help point out the foreignness of the world being built. It works so well here. Especially in Inventory. It starts with a list of a woman’s sexual partners and slowly evolves into the story of the apocalypse brought on by a contagious disease. It’s so simple, but so effective. Also Mother, which I don’t want to give too much away on.

Especially Heinous made me laugh out loud, if you have ever spent a night binging Law and Order SVU (CHUNG CHUNG) I think it would be tough not to get exactly where she was coming from with this one. It is brilliant.

OK, I don’t just want to give a run down of each story. Just go get the book. Eight Bites and Bad at Parties hit me in the gut in the best way. Real Women Have Bodies and the Resident were probably the two that I didn’t connect with quite as much as the others, but they are still good, solid stories.

I just keep going back to how strong the voice is int his book, yet the variety of styles is really amazing. This is a short story collection with a lot of depth. It deserves all the praise it has received.

This fills The Collection Square on my Bingo Card