> FAQ Home
> Genre: Comedy/Humor > Not sure if it’s me, the genre, or the book… #SummerRead 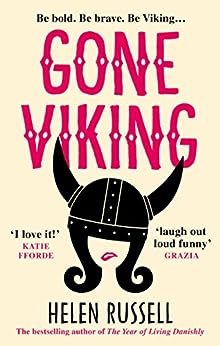 …but I’m inclined to think it’s the book.

I picked up Gone Viking earlier this summer for my book club (we’re all internationals living in a city in Denmark, and we chose this one because of links with Denmark). I was willing to give it a go, even though I never really read chick lit. (Note: not dissing the genre at all, just saying it’s usually not the sort of thing that interests me!) Since no one among us liked it (and others didn’t even finish), I think it’s not just me or the genre: the book just isn’t that good. We chose it because literally everyone who moves to Denmark (except me) has read Helen Russell’s A Year of Living Danishly. After reading Gone Viking, I don’t think I’ll be reading that one either.

It centers around Alice, an uptight British dentist with two children, a super lame husband, and panic attacks. She has a fling (maybe?) at a dentist conference and thinks her life is going to turn upside-down, which is the only reason why she agrees to go on a week-long ‘retreat’ with her total-opposite sister, Melissa. Turns out, Melissa’s idea of a retreat is a women’s ‘get in touch with your inner Viking’ session on a rural island off the coast of Denmark. It’s cold, wet, and not at all Alice’s idea of fun. And Melissa wants to have some sister bonding time, which just makes it all worse…

Don’t listen to the blurbs. Grazia is wrong. It isn’t laugh out loud funny, more like a thin smile because you feel like you’re obligated kind of funny.

First off, I hated the writing style. It was too chatty, too informal–and trying FAR too hard to be both of these things. Secondly, none of the characters were compelling in any way. Alice is supposed to be The Worst, but since literally everyone else sucks too, there’s no one at all to care about. Thirdly, the plot was just… really not compelling. I just Did Not Care.

There were a few funny jokes for internationals in Denmark (but only really Brits in Denmark, or Americans-who-have-lived-most-of-their-adult-lives-in-Britain, like me.) So, uh, that’s a limited category, and it’s not really worth reading even if you do fit it. Every year it seems I have a ‘I hated it book’. Welp, I think this is this year’s.