> FAQ Home
> Genre: Mystery > One of Poirot’s most far-flung cases: an interview (#TwoHeadsAreBetterThanOne) 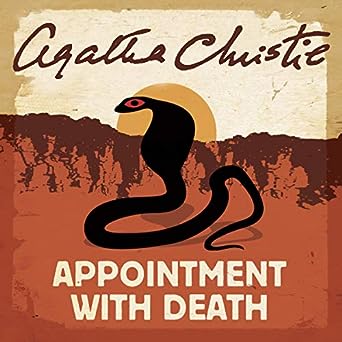 I’ve recently introduced my husband to the Poirot TV series and then to the books, because there were some episodes I refused to let him see until after he had read the book. We ended up getting some of the audiobooks, because he’s a big fan of the format, so we’ve listened so far to Death on the Nile, Appointment with Death, and the Murder of Roger Ackroyd. For #Two Heads are Better than One, I decided to interview him on Appointment with Death, which had been one of my favourites when I first read it as a teen. For the purposes of the interview, I’ve dubbed him ‘Aquillius’, as the masculine form of my faux-Latin username, and only slightly modified his verbal answers.

Snarky comments in parenthesis are mine.

Please note: there are some spoilers! Though we stop just short of revealing the murderer. I whited-out something that revealed a bit too much about the ending.

Quick summary: An American family vacationing in the Middle East is psychologically tortured by their mother, to differing extremes. When she is murdered in the exotic archaeological site of Petra, any and all of them could have a motive to have killed her, and Poirot is called in to figure out the murderer.

Aquillius: I liked the cast of characters, the setting (Petra was exciting and exotic), the figure of the tyrannical mother, the humor. I’m not so sure about the low-stakes romances, for example the ‘romance’ with Gerard and Ginny. I didn’t feel like it was necessary.

Aquillia: I had really loved this one; I think it’s an over-all good mystery. I learned during my undergrad in Ancient History that Christie’s second husband was a famous archaeologist and that she had accompanied him to the Middle East, so I really love that she wrote mysteries like this one incorporating some of the sites her husband worked on or that she visited. It’s also interesting that Mrs. Boynton is not even killed until halfway through. So much of the story is built upon her being truly horrible, almost deserving of her fate.

Q. Were there any characters you found particularly interesting, funny, or likable? (Or the opposite?)

Aquillius: The fucking awkward Lady Westholm friend (Ed: Mrs. Pierce) was amazing. Everything she said was hilarious. Obviously you like Poirot. I really liked the mom; I thought she was so well-written. All the characters fit in, even the American guy seemed like he had a purpose. I didn’t find Sarah King so interesting; I understood that her perspective was important for the story, but she didn’t seem so necessary. I liked Gerard; I thought he was a good buffer for Poirot. Clever psychologist who is trying to work it out, and then Poirot is miles ahead.

Aquillia: Actually, I really enjoyed Mrs. Pierce this time around as well. Christie plays with stereotypes so well, and Mrs. Pierce as a dithering lady with no actual sense could be something of a nothing character but is great comic relief. But I have always liked Nadine. Cool and calculating no matter how difficult the circumstances, the only one not under Mrs. Boynton’s spell even though a poor relation married into the family could have been extremely vulnerable. I like that Mrs. Boynton always underestimated her.

Q. So who do you think was supposed to be the ‘Hastings’ of the story?

Aquillius: I guess Sarah, in the sense that she helped make some of the main discoveries, but she wasn’t dumb or anything.

Aquillia: Yeah, Sarah and Gerard to some extent, but they’re no Hastings.

Q. What did you think of the solution?

Aquillius: I thought it was good because you always had a chance to figure it out. It wasn’t something that was revealed late and you could only guess at that point; it was something that was there all along. I thought the murderer had a good motive and I think it was very dramatic that (spoilers) she committed suicide when she was discovered(end spoilers).

Aquillia: I remember this one shocking me as a teen. But I am rather put out that Aquillius figured this one out like halfway through ‘because it made most sense for the themes in the story’. Who reads a mystery like that?! I’m always swept along in the narrative, trying to figure it out clue by clue like some peasant.

Aquillius: I can’t remember any stand-out ‘super disses’, but Poirot was Poirot: he was great, and it was interesting that he was introduced so late in the story.

Aquillia: I appreciated the very Poirot thing of ‘yes, this woman was horrible, but no human should ever take another human’s life’.

Q. What did you think about Hastings (Hugh Fraser) as the narrator?

Aquillius: Obviously divine. He’s a really good reader. I love his voice and I love the way he does different characters. He’s very easy to listen to. (Ed. note: And fall asleep to).

Aquillia: Only bested by Suchet himself, I think. He is really a fantastic narrator with a gentle, soothing voice.

Q. How does it compare to the Poirot TV version?

Aquillius: A million times better. Like, not even lying.

Aquillia: I am actually angry at how bad the TV version is. I don’t care that it has Tim Curry; his character sucks. The story was completely mutilated in ways that made no sense and only served to make Mrs. Boynton less terrifying than she ought to have been. Go away, stupid nuns and even stupider romances.

Overall thoughts, which for one of us turned into a comparison between Appointment and Murder of Roger Ackroyd:

Aquillia: Years later, this one still holds up! (And so, IMHO, does Ackroyd). I’d love to see an actually well-written film version. Don’t tell me to watch the Ustinov one, he’s #NeverMyPoirot.