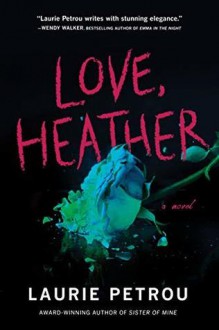 Please note that I received this book via NetGalley. This did not affect my rating or review.

So this book I thought was a very good look at how bullying can lead to actions that none of us would like to see happening in high schools today. The main character Stevie is being raised by her mother in a small town in Canada. Her father has left some time ago (the timeline issue I had will be discussed further below) and barely stays in contact with her. So Stevie has thrown herself into the family life of her best friend Lottie. I thought though that some key aspects of the book that were shown Petrou ignores later on. I wish that it had been brought up later on, but it seems like there was a rush to get to the ending. Petrou does a great job of showing the terrors of high school, how those who “don’t fit in” can be bullied, and how many adults just either ignore it or think that it’s something that kids need to get through.

“Love, Heather” follows 14 year old Stevie. Stevie feels a bit unmoored due to her best friend Lottie now being pulled into the cool crowd at school. Stevie at first is grudingly accepted along, but due to a faux pas and her need to be part of everything, she starts to turn off one of the Queen Bees and then Lottie. Soon she is being bullied and harassed via social media and has no one to turn to except for a girl named Dee who seems just as sick of the Queen Bees of Woepine High School as Stevie does. Taking inspiration from the movie “Heathers” the two girls soon start to get back a those who have overlooked them, harassed them, and bullied them by leaving their calling card, “Love, Heather”.

Stevie pulls at your heart strings. She just wants to fit in. A girl who loves movies, who misses her father, and wishes that her mother was there for her more, you can see why she envies Lottie’s family and pushes her way in there, even when she is not wanted at times. When Lottie’s family goes through a big upheaval, Stevie still pushes her way in and doesn’t read the nonverbal and even verbal cues from Lottie to just let things be for a bit. That said, at times I wanted to take Stevie aside and tell her to relax, to not try so hard. Throughout the book you can feel her anxiety at being left out of things, at Lottie getting new friends, and even a guy she may like. She wants to keep them looped into one another and she doesn’t understand why Lottie is trying to pull away from her. And then of course that loops back to Stevie’s father who in essence abandoned her, and her mother who is focused on finding love again.

The other characters in the book needed some development I thought. Maybe if Petrou had shown Lottie and Stevie prior to this time period it would have worked. But since we just get Stevie’s POV, we get the sense that Lottie was pulling away from Stevie long before now. I wish we had gotten Lottie’s POV at times since I can see why she gets frustrated with Stevie. It’s hard to be responsible for someone else’s happiness.

We get Lottie’s mother who is going through something big that Stevie feels close to.There is a whole plot dealing with this so I won’t spoil, but it makes things more complicated for both girls.

The other girls in this story, Dee, Paige, and Breanne are all different, but yes, you can see that Breanne is the typical Queen Bee who slaps down at anyone that she perceives as weak. Paige at first seems a little nicer, but just seems eager to go after anyone in order to keep Breanne out of her face. Dee reminds me of JD from Heathers. Looking to cause chaos in anyway that she can. I can see why though Paige pulls away from Stevie, Breanne is just a nasty piece of work though.

I thought the writing was good, Petrou obviously thinks that her readers will be familiar with the movie Heathers and get the references to that in her book. I do think though that the “twist” should have been discussed or analyzed. It seems to have been largely ignored after readers get the reveal about it and I honestly then went back to certain scenes. The flow was up and down and I do think that is because sometimes things are discussed and I would get confused about the time period. For example, there is reference to Stevie’s father leaving and her mother having to be a single mother. Then it’s inferred he must have left years ago which made no sense based on what was said. It was little stuff like that which threw me. Petrou does showcase the months that are passing in the story though so you can see how long it has been between incidents.

Though the book takes place in Canada, it of course has similarities to schools in the United States. We have Stevie going through the motions of the day and dealing with the never ending onslaught of bullying and you can see the toll that takes on her. Lottie’s mother

I thought the ending wrapped things up too neatly. Though I don’t know Canadian law, I would still wonder at the lack of consequences for things that go down in the book. I can’t complain though since I think the American justice system at times has too harsh of a sentence instead of trying to address a problem.