When the first Harry Potter book came out, I read a review of it in the New York Times and thought it sounded like a fun series for kids. After The Chamber of Secrets came out, the Quality Paperback Book Club (of which I was a card carrying member) offered a deal to get both volumes in hard cover, so I took advantage of it. Like millions of people around the world, I fell in love the the stories and their characters. When The Prisoner of Azkaban was published, I went to the local Borders Books and had to search high and low before I could find it. If memory serves, it was after this third volume that the Harry Potter craze really took off, with book release parties regularly making the news. I was one of those people who pre-ordered each subsequent volume and had it delivered on the day of release. For each new book, I made a point of re-reading all previous volumes in anticipation. I loved these stories and mostly loved the movies, too. For whatever reason (perhaps because the Death Eaters of the world seem to be making a comeback), I have been wanting to go back and re-read these stories and be reminded of the power of goodness, valor, friendship and love. 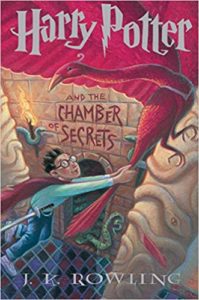 It seems strange to review these books. I mean, who hasn’t heard of Harry Potter? If you haven’t read the novels, you’ve probably seen the movies. Or at least you’ve absorbed some information through the many stories in the news or from family and friends who are fans. For the completely uninitiated, the Harry Potter stories are about a boy who was orphaned as a baby and has been raised by his hideous relatives the Dursleys. The Dursleys are reminiscent of the kind of nasty, brutish adults that populate Roald Dahl stories. At the age of 11, Harry discovers that he is a wizard, that his parents were magical people murdered by a very powerful dark wizard named Lord Voldemort, and that he has been accepted as a student at Hogwarts School of Witchcraft and Wizardry. Harry’s life does a complete about face. He goes from a neglected and abused young man to a celebrity. You see, when Harry’s parents were murdered, Voldemort also tried to kill baby Harry, but his hex backfired, giving Harry a lightning bolt scar on his forehead and leaving Voldemort nearly dead himself. Harry is famous and revered as “the boy who lived” in the magical community.

Harry’s initiation into Hogwarts leads to his introduction to a number of witches and wizards who will become great friends or deadly enemies. Among his friends are Hagrid, the giant groundskeeper; Professor Dumbledore, the wise headmaster; and Ron Weasley and Hermione Granger, fellow students who will accompany and assist Harry on his adventures. Enemies include student Draco Malfoy (such a perfect name!) and Professor Severus Snape. Snape knew and hated Harry’s father and seems intent on making Harry’s life miserable. Snape was also once a follower of Voldemort, and Harry cannot believe that Snape deserves the trust that Professor Dumbledore places in him.

From the first novel, we learn that Voldemort, despite an absence of 11 years and nearly mortal wounds, has survived and is attempting to make a comeback. With each subsequent novel, we learn how Voldemort’s faithful followers are trying to help him back to power and how he is growing in strength. Each novel gives a bit more information about the past, about how Voldemort came to power in the first place and about Harry’s own family. Harry, Ron and Hermione find themselves in dangerous waters with each story, and they have to use their talents and rely on each other to discover and defeat the sources of evil that arise in each book.

But these are also stories about young teens, and much of what happens will sound familiar to anyone who remembers what it’s like to be a tween and teen: rivalries, homework and exams, competition among school teams. What’s especially fun, though, is that Rowling presents all of this with a twist. So the sport that Harry becomes truly great at is a wizarding sport called Quidditch and involves flying around on broomsticks. Classes include potions, defense against the dark arts, charms, and transfiguration. Hogwarts castle is full of ghosts, and the people within paintings are alive and able to talk. And there’s the common teenage problem of dealing with both people you dislike and managing friendships. Harry and his house, known as Gryffindor, are rivals with the Slytherin House, which is full of snooty students who only want to deal with “pure blood” witches and wizards. Malfoy is a Slytherin and he and Harry hate each other. Yet even among friends, there can be turbulence. Hermione is extremely smart, but she is also a stickler for the rules which sometimes puts her at cross purposes with Ron and Harry. Their relationships are not always smooth and easy.

Rowling deals with some serious issues in these stories: prejudice, injustice, the desire for revenge, learning to face one’s fears, and maintaining hope in times of darkness. I remember seeing a video of Rowling on YouTube in which she gave a commencement address at Harvard. In it, she talked about her time working for Amnesty International and the types of people she met there — people who had been tortured and lived under repressive regimes. It’s clear that her experiences there informed these novels. She deals with very serious real world problems in a way that young readers can understand. She doesn’t underestimate her readers’ ability to relate to characters who suffer, who make mistakes and learn from them, who try to do what’s right even though things don’t always turn out right. 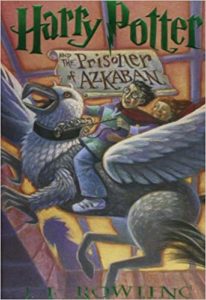 Re-reading these first three volumes was a joy. I’ve seen all the movies countless times, and I was reminded how much richer the novels are. I’d forgotten how important the Quidditch matches and House Cup competitions were in these first volumes. I’d forgotten how fraught the relationships among Harry, Ron and Hermione could be. The films really don’t make much use of the ghosts, who appear frequently in the novels. No Peeves the Poltergeist in the movies! And I think the nastiness of Draco and Snape is much more pronounced in the books than in the films. The Dursleys get short shrift in the movies, too. I might have to just keep reading through the rest of the series now. Do I still love them? Always.