> FAQ Home
> Genre: Mystery > Returning once more to one of Hercule Poirot’s greatest cases #I Love This 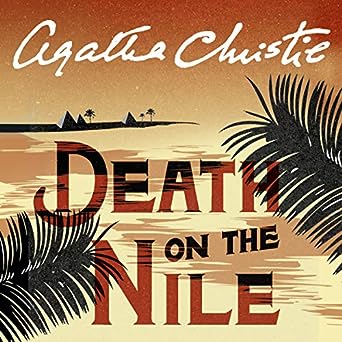 Sometimes I feel like my CBR reviews are either fantasy or Agatha Christie. I’ve been a fan of both for years, and I return sometimes to Christie when I need a quick read. This time, it was actually because I found that my library has the audiobook version of Death on the Nile–read by DAVID SUCHET. Who uses his Poirot voice when appropriate. Needless to say, I LOVED this version of something I’ve already loved for ages.

Death on the Nile is one of Christie’s best in terms of the actual mystery, but I’d actually forgotten just how good it is. I had thought the Poirot TV version of it was good (Emily Blunt!), but actually, it does NO justice to the original. (Except for the inspired casting of Cornelia, who was perfect.) The plot of this one is just superb, but when you know what happens, it can sometimes be hard to keep interested. Not so with Death on the Nile. The cast of supporting characters is where the real charm lies. I had forgotten that Mrs. Allerton is one of the most likable Christie characters ever created. I’d forgotten just how badly one feels for Rosalie Otterbourne. I’d forgotten that Cornelia was damn awesome and I am completely invested in her ridiculous love triangle every time I read it. (P.S. She makes the right choice).

Once I finished it, I listened to it again, this time with my husband, who I am slowly turning into a Christie fan, especially now that he loves audiobooks and is super eager to listen to the ones read by Suchet and Hugh Fraser. I smell a #TwoHeadsAreBetterThanOne on the horizon…

Really, the only bad thing I can say about this version is that Suchet’s voice for Col. Race is really obnoxious. If he’d had a minor part it would have been fine (like the super obnoxious Ferguson) but Race is actually in this one a lot. It still gets 5 stars.