> FAQ Home
> Genre: Non-Fiction > But seriously, why don’t kids come with a manual? 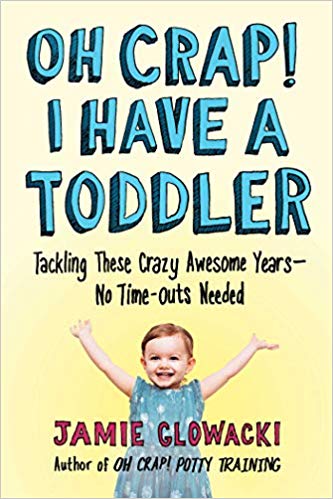 Jamie Glowacki is the potty training whisperer. She wrote the very popular Oh Crap! book that a lot of parents use when facing this particular parenting hurdle. I used it! It was very helpful. And I liked her style of writing and no nonsense attitude. This is a more general follow up dealing with toddlers and their particular brand of insanity. Sorry, development.

The book is split into two parts, the parenting part and the kid part. The former addresses how we can impact our kids outside of their behaviour. Are we trying to parent in a way that’s opposite to the way we were raised, even if that’s not what our kid needs? Do we have some baggage that we’re bringing to it, basically. And how can we be mindful of that? The kid part is how it sounds, what’s going on with them developmentally at this age, and how to deal with what may look like naughty behaviour.

A part that I liked is how she separates parenting at different ages (although this is based on another author’s work). Zero to six is governing. You’re in charge. Your kid has no idea how the world works and doesn’t have the brain development to understand certain things (ie, executive function is not happening). You can’t expect kids in this age range to make good decisions cos they’re curious and testing limits and generally figuring shit out; Six to twelve years is gardening. You can back off a bit but you’re still a firm hand; Twelve to eighteen is guiding. You’ve done all the hard stuff and are there mostly for support. Glowacki talks about how a lot of parents have this backwards and try to guide in the early years and then really struggle as the kids get older, cos it’s too late to govern then. And yeah, that makes sense to me.

I also like that she doesn’t set any rules down in stone or say ‘this is how you should do it’ (even if at times this is exactly what I want. Tell me what to do!). She says you’re the expert of your kid so trust your gut. The book is just there to help and you can take or leave it as you like. Which is good cos there are places I agree and disagree with her. Like sleep. She says it’s so important she considers it a nutrient. Yes! Sleep is so important! It’s vital to a healthy and happy kid. But she also says sleep begets sleep and to err on the side of more sleep and sure, for babies that might work out but not necessarily for toddlers. If I let mine have a very long nap they’re not gonna sleep more at night, I’m just stealing an hour or more from their night sleep. I’m lucky that mine have average to high sleep needs and at two are still doing 13.5 hours a day. But there are kids out there the same age with very low sleep needs who only do 11. And if you’re trying to get them to spend more time in bed it’ll be an exercise in frustration for everyone. I see this a lot with sleep consultants. Something wonky with your kid’s sleep? They need more! When actually it might be a sleep hygiene issue or they’re just on the lower end of needs. A better tip would be to figure out what your kid’s needs are and work from there. But yes a consistent bedtime and routine are vital.

The book is more geared towards the age of three and up, so wasn’t all that useful for me right now, but there is some general advice and I’ll probably dip back into it as mine get older. The kindle version doesn’t have a table of contents though which is kind of annoying for when I do just want to look up certain parts.