> FAQ Home
> Genre: Biography/Memoir > How is this my first Jen Lancaster book? 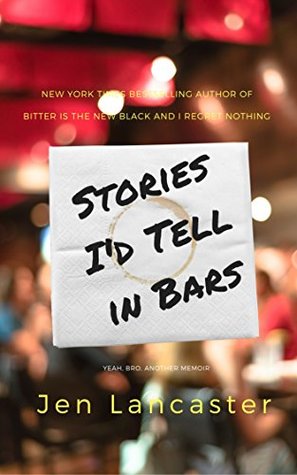 Jen Lancaster has written a lot of memoirs, and I’ve somehow never picked one up. This e-book ended up accompanying me on a camping trip, and it was a fun read. None of the tales were particularly life-changing, but as a collection, it was as advertised — like hanging out with a friend at a bar, telling stories. Apparently she chose to self-publish this collection after it was turned down by her usual publishers. That had to have stung, after years of success, but no bitterness comes through. I did catch quite a few spelling errors though…

“Love at first sight is only a thing regarding dogs or designer purses.”

These are stories told by an adult woman looking back over almost 50 years of life. They run the gamut from dieting (the Whole 30 chapter was pretty funny, even if you’re sick and tired of hearing about Whole 30), visiting her daughter in college, and life with her husband Fletch, who seems pretty laid-back. There’s an entire chapter about what songs can be classified as “yacht rock”, and appropriate pool games and drinks to accompany said yacht rock. It’s a lot of rich white people having fun, but it feels more inclusive than snobby.

The last (I think it was the last) chapter was a spoof of a Real Housewives kind of show, like Lancaster was pitching a script. I only read about a third of it. It really was not up my alley of interest and I found myself rolling my eyes in annoyance. Other than that, it’s a great collection.