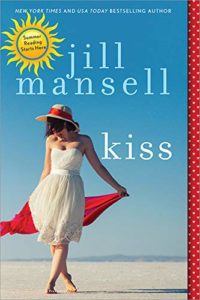 I received this book for free via NetGalley. This did not affect my rating or review. This book will be released on August 1, 2019.

So this book was published in 1993, and boy does it show. I think a few times Mansell probably went through and tried to update (she brings up Harry Styles at one point) but other dated references are still here (a new release of an Arnold Schwarzenegger movie). I could have overlooked that if the story had been good. Too bad it wasn’t. I think it’s been a while since I disliked every single character in a book. And it didn’t help that there is a whole romantic subplot that no one called out for the horribleness that it was. It was just glossed over with people thinking the other party in it was a slut. This book also is not a good send up of what makes a good relationship at all.

The story gets going after Gina leaves her house in tears after her husband Andrew comes home and tells her that he is leaving her for someone else. And not only that, Andrew’s mistress is pregnant. Gina ends up in an accident and hits Izzy who was on her motorbike. Izzy is in her late 30s and still trying to make it as a singer. She has her 17 year old daughter Kat and two boyfriends (I think they were named Mike and Rich) and everything comes to an ugly head and I wish I could have laughed, but I honestly disliked Izzy and even Kat for making sure that the two men were unaware of each other.

Gina feeling guilty due to Izzy losing her apartment tells her that she and Kat can live with her.  Then Gina’s old friend turns up and moves in with them all. Then the whole book becomes a mess.

I honestly don’t know what to say. Gina is awful. You are supposed to pity her. But seriously. She has no personality at all. She is bereft because Andrew left her, but then demands that Izzy not sleep with Sam while he lives there. It’s none of her business and I would have laughed at her demands.

Izzy is also awful. Her hiding having two separate relationships made me hard sigh. She’s not some teenager. She is in her late 30s. If both men knew about the other and were okay about it that be one thing. And her deciding she had a thing for Sam, but playing games so he didn’t realize it and want her more? Are you serious. Also I found her whole story trajectory to be 100 percent unbelievable. The whole thing read as soap operaish in a bad way after a while.

Kat. Sigh. She’s 17 and her whole “relationship” made me scream inside. Also I am guessing the age of consent in the UK is lower? Cause in America I would have hoped that her “lover” would have been reported to the police. And after that mess that goes on she has another love interest who plays mind games with her in order for her to “fall for him.” Bah.

Sam. That’s another no. At one point I just went what is the point of this guy and realized there really was none except for three separate women to be into him. His whole thing with Izzy was boring and the stupid why we can’t really be together thing came out of nowhere.

The mistress was pathetic and also garbage. And there was some fat-shaming going on that made me cringe.

There are other people but my brain refuses to remember.

The writing wasn’t as crisp as other Mansell books. She has definitely learned how to juggle multiple story-lines. After a while I wondered if this book was ever going to end since it just jumped from character to character with no forward movement until everyone ends up making disastrous choices. Then the book gets into what I would call it’s third act and some people get their shit together and others it takes until the ending.

The ending. I just can’t applaud it. Ninety-nine percent of the characters sucked and there was very little development of anyone. There also seemed to be an underlining message of lie and manipulate the person you love so that they fall for you. See Gina and Kat’s “romances.”