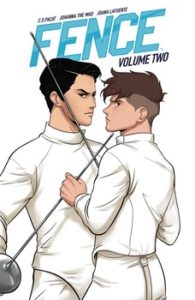 As per narfna’s suggestion in a glowing review of the first volume of Fence, I waited until there was at least a second volume out: and it still seemed to go by far too quickly! At least the next one is scheduled to be released in August which isn’t too far away, I guess… In any case, this comic series is a super cute and fun one, about a sport I haven’t seen featured much in sports movies/books, etc. There are definitely some familiar features to this as a “sports story”, and do I feel like I know a lot of the beats to this narrative and how it’s going to come together? Yes. Do I really care? NOPE! (And for that matter, I may be wrong in the end!) But I’m hoping for my favourite trope of enemies-to-teammates-to-friends-to-lovers to come through in the end. Time will tell!

But more about this series: Fence follows a group of students at a boarding school, and the main conflict at the moment are the tryouts for the fencing team. Our protagonist, Nicholas, is the son of an Olympic fencer (though nobody knows this) who just wants to fence and prove himself in the same sport as his father. His place at this school also rides on him maintaining a scholarship contingent on him making the fencing team, so there really is a lot to lose for him here. Nicholas’ main foe, however, is a fencer named Seiji, who has been trained from a young age and is effectively a prodigy of the sport. Seiji and Nicholas had a bout during a regional contest which left Nicholas in the dust, and now he wants to also prove himself against Seiji as a legitimate competitor. Rounding out the cast there are plenty of other boys at this school, with histories, drama, and motivations all their own. The characters are punchy, memorably, and fun, and so is the storyline for that matter (if a little quick to zip by, like I mentioned). While the first volume establishes the characters and gets Nicholas to the school, the second volume really pumps up the volume in terms of mainly focusing on the team tryouts and the internal struggles of some of the students that this brings up for them. Though both seemed to end on decent cliff-hangers to keep me wanting more!

Honestly, this series is basically just throwing all of my favourite little tropes and tricks into one place (*and they were roommates!*), and I can’t help but feel like I’ve been specifically targeted by it. I will definitely continue with this series as it goes along.