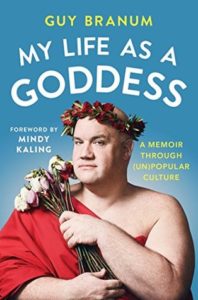 I got this as an audiobook, as I almost always do when reading a celebrity memoir, especially if it’s a comic. If you are going to read this book I recommend the audiobook.

So I spent a good 90% of this book thinking, “I know, right??!!” It is almost creepy how much Guy Branum and I think alike. He grew up in a town about an hour away from where I grew up and he’s only about 4 or so years older, which I think contributes to this a lot. We both love trivia and pop culture and so I don’t think it’s really all that weird we would have similar world views. At the same time every few chapters I’d think, “Get out of my head! No, stay in there, you are far wittier than I will ever be about this topic.” I do have a slightly different take on Bohemian Rhapsody than he does, but it’s very much in the same ballpark, so I’m counting it as a match.

This is a fun little memoir that alternates between stories from Guy’s life, mainly his childhood through his 20s, and diversions into the world of pop culture, diversions that usually tie back into a theme regarding the family story that the chapter started with. Guy grew up in a small town outside of Yuba City, California. His story will have elements that many gay kids in rural areas will probably recognize, though anyone who spent time in rural California knows it isn’t quite the same as the rural midwest. He does have a voice and a way of sharing these stories that I find very real and fun and loving. He isn’t letting anyone off the hook, but he knows where they come from. His stories about breaking into the comedy scene in the mid to late 90s and going to law school are really funny, maybe because I, too, was way too into Quiz Bowl in the mid to late 90s.

As much as his humor is self deprecating, it is clear he feels a true and genuine love for his younger self, which is great and makes this work so well. When he does talk about remembering you are a Goddess, it isn’t fluff, as much as he’s being funny he isn’t being un-serious. He is talking very seriously about how important it is to always remember that you are important and your story is important, even if it feels like the world is telling you otherwise.  You can laugh with yourself, but don’t discount yourself. It is especially moving when he is talking about his mom and her life and the choices and compromises she made throughout it.

Oh, and yeah, he talks about Chelsea and what happened when he was on her show. But honestly, it’s the least interesting part of the book. Everything else he talks about is way more fun and engaging.

Guy is an insanely intelligent man who has a knack for good deprecating humor and a really biting wit. This book flew by and when it was over I wished there was another one. Or that we could go get coffee and talk shit about Shakespeare or something. So if you ever liked anything else he’s done, or if you’re a fan of, say Mindy Kaling’s book Is Everyone Hanging Out Without Me give this one a try. Come for the gossip, stay for the astute personal insights and surprisingly interesting Canadian history lessons.