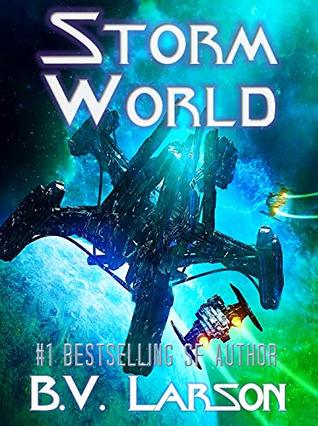 Last year, I wrote a 4,500 word review of BV Larson’s Undying Mercenaries series. Overall, I liked the series but wasn’t impressed with the sexist overtones of the books, or the possibly alt-right leanings of the author (which I may have just invented out of whole cloth).

Despite my real issues with the series, it was enjoyable in a “it’s leeching happiness from my soul” kind of way (sort of like Taco Bell), so I didn’t really have much choice in picking up the latest installment in the series.

This time out, McGill and Turov are….kind of dating. Or, at least, engaged in something more meaningful than unadulterated disgust-tinged sex. Why Turov over Natasha (who always seemed like the more natural love interest) or Della (the mother of his child)? I don’t know. Reasons. I mean, the women are really just window dressing anyway, so I don’t suppose it really matters.

Once again, this takes place on a planet with a unique feature (storms all the time) populated by a race that is fairly undeveloped (this time, they’re salamander-like). They are besieged by the Wur, and have reached out both to Earth and Rigel for protection. So McGill and Co. end up fighting a dual-front war.

This book isn’t breaking new ground. It’s an adequate continuation of the series; which is to say, a mildly enjoyable book that is good entertainment for the period of time in which it’s read. It’s not going to stick with you. It’s not going to inspire you. But it’s not something you’re going to put down apathetically.

You may put it down in disgust, though, because (again) McGill doesn’t really value anyone, and women (especially) serve only one role.

So I’m not really going to recommend this book (or series) to anyone. But it’s there. And I read it.