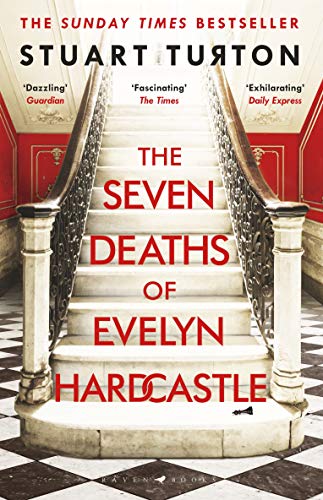 Now that Bingo is over, I’m getting around to reviewing all the books I read this summer and autumn that didn’t fit into Bingo Squares. One of my favourites–an unexpected favourite–was The Seven Deaths of Evelyn Hardcastle (or, as I believe it is called in the US, The 7 1/2 Deaths of Evelyn Hardcastle). When I found the link on Amazon, it was rated #1 for science fiction. I don’t think that’s an apt comparison, however, because part of the charm of this book is that it doesn’t fit into genre categories. At best, it’s a historical fiction murder mystery set with supernatural elements. I think a better name for whatever genre this belongs to is ‘Speculative Fiction’, as broad as that is. But, perhaps because I generally read fantasy, it was the mystery elements that came through strongest for me. And that’s great, because I love a good mystery. And I also love historical fiction and fantasy, so really, it was a weird yet perfect melding of things I love. A lot of other people must like this melding as well, because the Amazon page lists lots of popular/company awards (mostly UK-based).

A popular description seems to be ‘Agatha Christie plus Groundhog Day’, but I think it surpasses both of these comparisons. For one thing, the protagonist is no Poirot, at any point, and I promise you that the detective and his methods is unlike any Christie you have ever read. I also think this is one of those books that the less you know going into it, the better it will be. In brief, without giving too much away beyond the first chapter and the Amazon summary:

A man wakes up in the middle of a forest with no knowledge of who he is or what he is doing there. All he knows is that he wakes up with a scream in his ears and a woman’s name on his lips: Anna. An unknown person pushes a compass into his hands and tells him to head east. So he does, desperate to find help for the screaming woman. He finds a ramshackle manor house and a whole lot of guests, all waiting for the evening’s gala in celebration of the daughter of the hosts, Miss Evelyn Hardcastle.

But it’s not just a celebration that awaits Evelyn Hardcastle that evening. It’s also a murder. Her murder. And her murder will happen again and again, the same day replaying ad infinitum, until our protagonist–who doesn’t even know who he is that day, or even really any of the other days that follow–is able to solve her murder.

Really, though, I think my description is better than the Amazon summary. The problem with the Amazon summary (and probably even the back blurb of the book) is that it reveals information that is withheld for several chapters. If you don’t really know what’s going on, the first chapters might be a bit confusing, but I think it’s better that way. It’s not just one mystery going on, after all.

One thing to note: obviously there is more going on here than a simple murder mystery, and the ‘speculative’ elements may feel off if you’re expecting just that. But at the same time, the novel doesn’t rely too heavily on the spec elements beyond the initial premise (and a deeper purpose for why it’s all happening). Beyond that, the solutions to the mystery itself are both rooted in reality and are delightfully twisted. There is no supernatural deus ex machina, at least to the solution of the question at the core of this novel: Who killed Evelyn Hardcastle?

I thought about giving this one 4 stars–it’s not perfect, after all–but I’m bumping it up to 5. I thoroughly enjoyed this book, even if it isn’t perfect, and I couldn’t put it down. Its novelty and the deftness with which it combines three genres makes it one of the most enjoyable reads I’ve had this year.