> FAQ Home
> Genre: Fiction > This Has All Happened Before and It Will All Happen Again 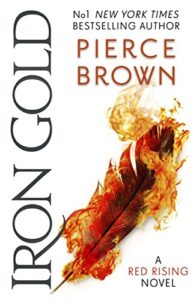 I loved the original three books of The Red Rising Saga so I was very excited when I saw that Pierce Brown had written a fourth novel to add to the series.  And yet, despite pre-ordering it, I was hesitant to start reading it. While a revolution and complete upheaval of the social order will naturally lead to growing pains, sometimes it’s better to hope the heroes figured it out rather than go back and see how much has gone wrong.  As fun as The Force Awakens was, there was something rather sad in seeing Luke disillusioned, Leia and Han split up, and the new government they tried to put in place under attack – like nothing they did mattered or made a difference. While relationships end, governments struggle, sometimes it’s nice to have the illusion of a happy ending and the ability to think, “they made it work somehow in this fictional world.”  The same sentiments held me back from Iron Gold.  I knew literally nothing other than it was set ten years later, but figured it was probably too hopeful to think everyone had lived happily ever after, especially if there is a new book.

The war as gone on for ten years with Golds still fighting in strongholds such as Mercury and Venus. People of various backgrounds were quickly disillusioned with the numbers of pardons issued to Golds by the new government despite them being active participants in keeping the old system in place. With the government focus still on fighting a war, many of the lowColors didn’t receive the support they needed to survive in the new social structures and are in some ways just as bad off as before.  Freedom and choice are great but how many people would choose freedom with persecution and starvation over slavery with some security, especially if they didn’t know they were enslaved? Is there a point when a warrior can no longer return home and is only a tool made for war? When is it time to compromise, and when is it time to fight?

While the original three novels were all from Darrow’s perspective, in this case, Brown uses multiple narrators, switching between four views.  Darrow struggles with the idea of whether he can live in a world of peace but believes there are a few more battles to fight before peace is possible, though the Senate may disagree.  He doesn’t know how to balance his role as a father and family man with what he feels is his duty, while Sevro, violent as ever, thrives as a family man and balances both. Lysander, grandson of the overthrown Sovereign of Luna, has been living on the edges with Cassius for the last ten years, and due to circumstance ends up involved with the planets of the Rim, where the people are divided between factions wanting war and vengeance, or stability and peace. While the series was about an uprising led by lowColoreds to break the caste system, so much of the action and so many of the characters in the trilogy were Golds, which makes Lyria’s perspective a welcome addition.  Lyria is a young Red woman, formerly from the mines, now living in a refugee camp on the surface with her extended family.  The shortages on Mars lead to violence and tribalism, with Lyria and her community of Gammas being among those targeted for past allegiances and decisions.  After a tragedy, she finds herself swept up into the life and politics of some prominent Golds, working as a servant on the capital on Luna. The final voice is Ephraim, a disillusioned Gray who lost his fiancée to the war, and now makes a living as an art thief. He finds himself forcibly hired onto an impossible heist, and spends most of the novel planning it and dealing with the consequences of his involvement with a crime organization.

When the novel begins, Darrow has disobeyed an order from the Senate, which cost a million lives, but also finally freed Mercury.  While he hopes to convince the Senate to give him more soldiers to make a final push and break the last stronghold of Gold resistance in Venus, the Senate has received a peace offer from Venus that it wants to consider, and also wants some type of consequence for Darrow’s disobedience.  Ten years have been long enough where Darrow is still a hero to many, but he can no longer push his will through without resistance.  Even Golds that supported the Rising voice opinions that show they still believe themselves at the top of the food chain, and too many people at the bottom have seen too little progress, still labeled by their color. As a result of Darrow’s disagreement with the Senate’s stance on peace, he decides to complete his own, unauthorized mission to end the war once and for all.

Darrow and Lysander’s narratives are mostly separate from the other characters though Lysander is haunted by the shadow of his memories and Darrow. Cassius believes that Gold failed in its duty, and that was why the Rising was ultimately justified. While Lysander mostly agrees with Cassius’s analysis, he also still places an undue importance on the concept of Golds, and hasn’t entirely made up his mind where he stands. By falling into Rim politics by accident, Lysander finds he must finally decide what he truly believes and wants.

While the novel is well written, it is also ultimately heartbreaking. Despite the hope for the future at the end of Morning Star, the Solar System is still at war, the lowColors are still barely getting by, and Darrow has not been able to find (or settle into) the family life he wanted. People have barely recovered from the losses of the Rising and the years of war that followed. The new Republic had to make compromises early on to make sure society could continue to function, and now without agreement on what the common enemy or threat is, the Senate is divided. It’s all entirely realistic and only what could be expected a mere decade after a structure that has been in place for centuries is overthrown but I wanted and hoped for better for Mustang and Darrow. I can’t wait to see where Brown ends up taking the rest of the series, and am glad that the next book is scheduled for September rather than being an entire year away. I wonder if Darrow will survive till the end of the series or if he will see himself displaced by the next generation, with men like Lysander and his son, Pax, having to build the peace for which he paved the way, or if they, too, will be consumed by a cycle of unending war and violence passing from generation to generation.