> FAQ Home
> Genre: Fantasy > Plutonium may give you grief for thousands of years, but arsenic is forever. 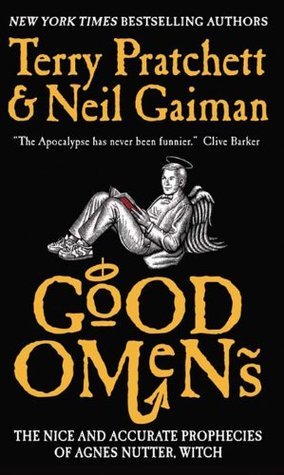 I cannot emphasize enough how much of a treat Good Omens is. Neil Gaiman and Terry Pratchett will also tell you how much of a treat it is. They will tell you in their introduction and their afterward how much they wrote it for the love of it and also how much people are obsessed with it. And whether the bragging is a little classless or a lot charming – spoiler alert: it’s definitely both – it’s also one hundred perfectly warranted. Good Omens knocks it out of the park for both style and content.

This book was written in 1990, before Gaiman or Pratchett were much of a “thing,” though Pratchett was definitely on the map with “Discworld” by then. Reading it, having mainlined a bunch of Gaiman by now but never have gone so far back as Good Omens, I can only imagine how much of a shot across the bow this book must have seemed at the time. It is unabashedly strong and right. The way in which these two seamlessly collaborated to tell a very true-to-tone, completely whimsical, deeply sacriligious but probably not technically blasphemous story that is adventuresome and tense is *chefkissinghisfingersdelicious*.

Obviously, I’m a fan. I’m trying not to spoil anything for you. Then again, just go read The Bible and also look around at humankind. Gaiman and Pratchett really just filled in the blanks.