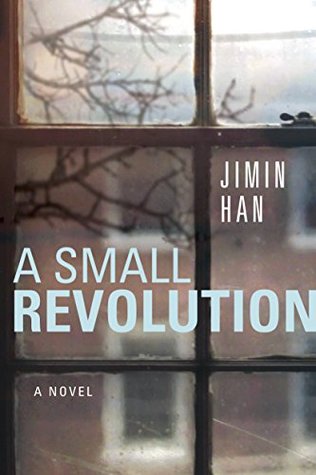 This book came to me by way of Amazon Prime’s First Reads program, so it was free, which was the correct price for it. I did keep wanting to love it, but fundamentally I hated it. Here is what it had going for it: it was a very fast read.

A Small Revolution is the story of a young Korean-American woman – our narrator, Yoona – who does a program in the summer between high school and college that brings Korean-Americans to South Korea for tour and immersion in the culture (it sounded to me like an equivalent program to Birthright, in which Americans who identify as Jewish get a subsidized trip to Israel if they are between ages 18-26). She meets a boy, she loses her virginity, the boy dies in a car crash, his friend loses his shit and becomes convinced it’s an international plot and he’s still alive, and he stalks Yoona to her college campus where he inundates her with the crazy and then takes her and a bunch of her friends hostage.

There is a lot of jumping back and forth in the timeline: the book starts and ends with the hostage story, but also we do go back to the summer in South Korea, and also follow the narrator’s first semester in college when Stalker McStalkerson (okay, his name is Lloyd) is getting his hooks into her.

Fundamentally, this book should be high stakes, all the time, but it really is very flat. I also had an issue with the writing style: it’s first person narrative, but Yoona calls her boyfriend “you” throughout the book, and during the hostage scenes, Lloyd speaks in ALL CAPS WHICH IS VERY DISTRACTING AND ALARMED AND DOESN’T LEAVE MUCH ROOM FOR NUANCE.