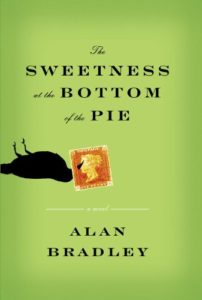 I am late to the Flavia de Luce train, but a random comment about the series that I came across somewhere intrigued me enough to request this book from the library.  While I didn’t up loving this book, it wasn’t bad.  It’s set in 1950s Britain, and Flavia is a precocious 11 year old girl who lives with her father and two older sisters; her mother passed away some time ago, but she she is far from forgotten.  Her family is rather eccentric and Flavia is pretty much left to her own devices. She aspires to being a chemist, and has her own lab where she concocts potions to torment her sisters with such as putting poison oak into lipstick.  Ophelia (Feeley) and Daphne (Daffy) in turn have nothing to do with her unless forced to.

The mystery of the book starts out when Flavia discovers a body in the garden, and her father is suspected of doing the killing.  After he is arrested, she decides to investigate on her own and discovers what happened during his younger days and a missing valuable stamp.  There are a lot of quirky secondary characters in the book ranging from the faithful gardener Dogger to the cook Mrs. Mullet to librarians and police officers.

I found Flavia to be a little too precocious and unbelievable for her age.  Oh, she was entertaining and some of her observations of family and friends were amusing such as this one:

“Once, when I remarked that she looked like a disoriented bandicoot, she leapt up from the piano bench and beat me within an inch of my life with a rolled-up piano sonata by Schubert. Ophelia has no sense of humor.”

Or some were incredibly intellectual:

“What intrigued me more than anything else was finding out the way in which everything, all of creation – all of it! – was held together by invisible chemical bonds, and I found a strange, inexplicable comfort in knowing that somewhere, even though we couldn’t see it in our own world, there was a real stability.”

In the end, maybe I’m just not the audience for the YA brand any longer, as I’m sure younger readers would enjoy the snark and the amateur sleuthing Flavia involved herself in.  Or maybe I just need to suspend belief more to enjoy it!  2.5 stars.