> FAQ Home
> Genre: Fiction > You’d have expected me to be just a minor character in this saga 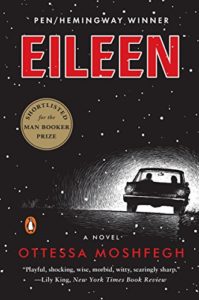 This is a tough one to review. I really liked reading it, but in the end, it felt as though the exposition was finally wrapped up, and now I was ready for the story. But actually, the book was over.

Not that there isn’t enough movement in Eileen, it’s just that the narrator tells us very early in the book that this is the story of her final days trapped in her terrible and sad life as she was raised – or more accurately, grew up, because it seems that no one in her life actively “raised” her. We’re told that she escaped to New York, came into her own, and lived a rich, complicated, and interesting life that was finally all hers. The narrator is in her eighties (probably), looking back on the final days before the great escape.

But, I was bothered by the fact that we only get glimpses into that life to which she escaped. This is essentially a character study through the lens of someone who resents having been boxed into the very role that she is narrating. And there’s plenty to resent, because it is absolutely awful, the ways in which she is trapped and demoralized and let down by her community: she is sexually repressed, afraid of her own sexuality, wearing a girdle 24/7 and outletting via bulemia; she is her father’s “caretaker,” which mostly involves buying his 2+ bottles of gin every day, and making sure he doesn’t burn the house down; she dropped out of college to work at a juvenile detention center where the other secretaries make her the butt of their jokes, and the salary from which goes straight into her father’s wallet. But she is also self-obsessed, and it seems as though she actively contributes to her own oppression, because she enjoys it somehow. I don’t mean to be a victim-blamer, it’s just that the characterization encourages you to see “Eileen” (as she calls herself, though the narrator tells us that she has changed all the names and places in the story, in addition to changing her name after her break for the big city) as a young woman who enjoys wallowing in misery.

That’s hard to support and sympathize with, and maybe that’s the point. But it’s also unrewarding, and I’m still wondering what happened next, and whether she’s a redeemable character.