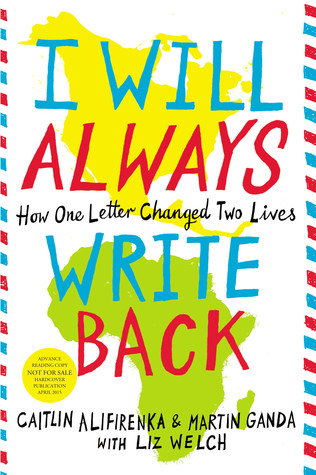 This book was written in 2015 about some events that started in 1997, when the main characters were 12. It’s written for probably a 12 to 15 year old audience. But something about the author’s voice makes it seem like a book written by a much younger person. Maybe she’s just really authentically capturing what it’s like to be a 12 year old girl, I don’t know. But I found it off-putting. I feel like the author, Caitlin, could have really benefited from making her present self sound a bit more adult — especially since the chapters written by Martin seem very adult.

So basically this story is about a Pennsylvanian student named Caitlin who begins writing with a Zimbabwean penpal named Martin in 1997. Unlike most of the other kids in her class, Caitlin and Martin kept up correspondence for years. Over time, she slowly began to realize the incredible poverty that Martin and his family lived in. Caitlin began to help him financially, and eventually bring her parents into it, providing Martin’s family with a safer home, clothing, shoes, school supplies and tuition. It’s a fantastic story, but the fact that Caitlin is the main voice (although Martin does chip in some) makes it seem pretty self-congratulatory. Not that she shouldn’t be proud of herself, but it’s very “look at me! look at me!” rather than “let’s help others”. Still, Martin story’s fascinating and I really enjoyed reading their correspondence.