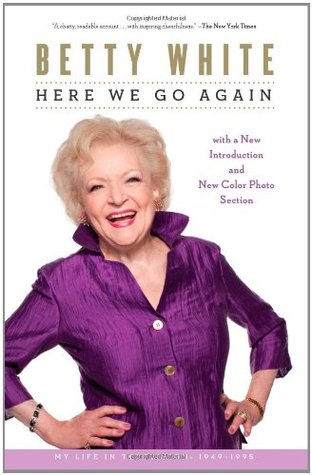 So I will admit that my first known exposure to Betty White was as the sassy old lady in Lake Placid (one of the greatest movies of all time, and I’ll fight you on that) who feeds her husband to the crocodile. She cracked me up with her foul mouth and her cute little face. I’ve always kind of been aware of Betty White, without ever having watched an episode of Golden Girls or any of the many, many sitcoms, game shows and late-night TV she’s appeared on. I pretty much know her from Lake Placid and as the grandma in The Proposal.

So I picked up this autobiography (that she actually wrote about 15 years ago). It talks about her young life just briefly, and then about the many years that she spent on televisio. She got started on TV just as people were starting to even buy TVs. She spend years as “the girl side-kick” on live television, participating in game shows, participating a late night. Honestly, the book drags on a little but it’s not her fault that she’s had so many years in a career! I love the stories about her love for animals. Her relationship with her husband, who passed away before the book was written, comes across his very sweet and loving. And the book is peppered with pictures of Betty and her dimples. For someone who grew up with her on TV, this book would probably mean a lot more. But as someone who just knows her as a slightly foul-mouthed Grandma, I enjoyed it anyway.