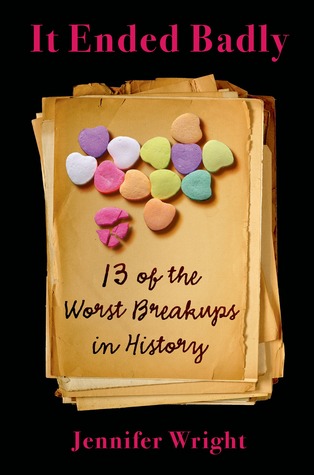 So I picked this book up after finishing Jennifer Wright’s fantastic book about plagues. I’ll never be interested in historical breakups the way that I am in plagues (who could be, really?), but I still enjoyed her writing style in this book like I did the other.

Several other people have reviewed it, but in case you missed those — she basically picks 13 breakups throughout history and explains how a really terrible they were. Like, really terrible. It’s a pretty simple concept and a fun execution (pun intended). From Henry the 8th getting rid of his wives to Oscar Wilde’s tragic romances, she covers a variety of people, topics and centuries. She also explains the variety of ways that these people got over bad breakups – – including some rather violent ones.

The writing is very tongue-in-cheek with lots of humorous references. I enjoyed it almost as much as I enjoyed her explanations of the Bubonic plague and leprosy!