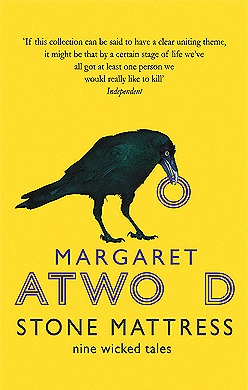 The cover of this book has a quote from a review in Independent that sums up these nine short stories better than I ever could: “If this collection can be said to have a clear uniting theme, it might be that by a certain stage of life we’ve all got at least one person we would really like to kill”. That’s…pretty much perfect.

“What is a stromatolite? he asks rhetorically, his eyes gleaming. The word comes from the Greek stroma, a mattress, coupled with the root word for “stone.” Stone mattress: a fossilized cushion, formed by layer upon layer of blue-green algae building up into a mound or dome. It was this very same blue-green algae that created the oxygen they are now breathing. Isn’t that astonishing?”

Stone Mattress is a collection of nine stories (or, as my edition says, “wicked tales”). The first three are linked through a few characters; the other six are independent (or I couldn’t find a link, anyway). All of them deal with some sort of indignity, some sort of revenge. They’re all, of course, fantastically well-written. In fact, this might be my favorite of Atwood’s short story collections, and I believe I’ve read most if not all of them at this point.

One of my favorites, The Hand that Loves You, deals with a struggling writer who signs a contract that he never should have agreed to. Another, the titular Stone Mattress, allows a woman on a cruise to confront someone who harmed her decades ago. The first story, which sets off the next two, stars an aging fantasy-writer as she struggles to make sense of things after her husband’s death — a husband who may have been unfaithful. There’s really not a bad one in the bunch, and I enjoyed the whole collection thoroughly.