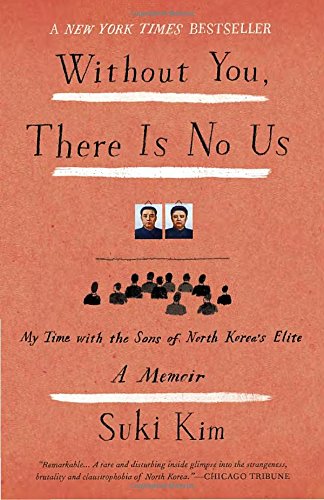 Without You, There is No Us ranks right up there with the scariest books I’ve ever read.

Suki Kim, a South Korean-American journalist, takes a job at a university in North Korea. The school is run by Christian missionaries hoping to crack into the “evangelical Christian Holy Grail. . .converting [North Korean] people would guarantee the missionaries a spot in heaven.” Suki’s not actually a missionary–she’s there to write an expose on North Korean culture. The result is Without You, There is No Us, a chilling glimpse into a society that is almost completely closed off from the rest of the modern world.

Suki’s students at the university are the creme de la creme of North Korean society, the sons of high ranking officials. They are there to learn English, but she is under strict instructions from the counterparts (North Koreans who work at the campus whose job is to approve lesson plans and spy on the missionaries) not to teach them about Western culture. As she grows closer to her students and begins to feel some maternal affection for them, she’s torn between keeping them safe (protecting them from Western influence, since they could be punished for too much knowledge), or trying to open their minds to the world outside of North Korea.

The boys she teaches are college-aged, and it’s striking to compare them to any college-aged kid you may know (or remember yourself being). They are endlessly polite, corny, more concerned with others’ well-being than their own, and incredibly ignorant. The story takes place in 2011, and these college students have never heard of the Internet. They don’t know who LeBron James is. They think kimchi is the most famous and beloved dish worldwide. They spend their school breaks helping their mothers, or else working on state-run construction sites for the betterment of North Korea, a place that to them is an international symbol of love, enlightenment, and progress. From a sociological standpoint this book is fascinating and so, so sad. Which is worse: leading an ignorant life full of suffering, where you’re never allowed to follow your own path, but you’re told that the life you live is the best there is, or living a normal life in 2017, with all the benefits of the modern age, but with the knowledge that there are people whose lives are easier and better than yours? These kids are so inordinately proud of their society and their culture that it’s easy to start to think they don’t really have it so bad–at least they’re happy. Then Kim describes all the lies she catches them in–that they each own cell phones and call their mothers every day, when no one on campus is allowed a phone. That they get to sleep in on the weekends, when in reality she sees them up at 6:00 am doing exercises. That they have tons of friends back home, when in fact they haven’t been permitted to see their friends outside of school in years. Then there’s the descriptions of the slaves she glimpses on a farm, the hollowed-out, soulless stare of the adults she sees in Pyongyang. The situation in North Korea is dire.

I learned so much from this book. Suki Kim’s family was torn apart by the Korean War. Her uncle, stuck on the North side, was never seen again. Her grandmother lost her mind with grief. The story of her family’s experience during the war is harrowing and sad, but really the most terrifying thing about this book is the shadow of Kim Jong-il (he died just days before she returned to the United States). Kim Jong-il’s word is law. Everything he says or does is the best and most important thing anyone could say or do. His love for the people of North Korea is so great, that he suffers with them when they are hungry or without power. It’s amazing how much this real place resembles the world in 1984. Big Brother is real, and he lives in North Korea. Obviously there are parallels to what’s happening in the U.S. nowadays, and frankly I’m getting a little sick of reading scary books that seem like they could come true here. Time to read something a little more cheerful.