Calling all Cannonballers! Submit Your Best/Worst of CBR14 by Saturday December 10!
> FAQ Home
> Genre: Biography/Memoir > God Save the King 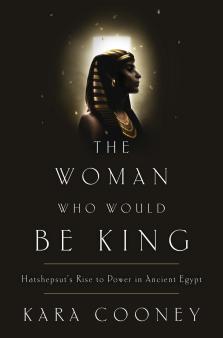 I think all of us went through an Egypt phase in school. It was right after our paleontologist phase and right before we became too cool for phases. We devoured any National Geographic with the pyramids on the cover, became a little too knowledgeable about the macabre process of mummification, and spouted off as many facts about the “cool” pharaohs that our patient parents would listen to. There was the trifecta of the most badass pharaohs to ever pharaoh-Nefertiti, King Tut and Cleopatra. Well, with due respect to the Big Three, Hatshepsut might leave them in the dust.

Kara Cooney’s “The Woman who Would be King” shines a light on this forgotten figure. Hatshepsut was the daughter of a general who usurped Egypt’s throne. Married to her brother, the short-lived Thutmose II, she was expected to bear the sons who would legitimize the reign of her father’s family. When that didn’t work out, she was expected to act as regent for her infant stepbrother Thutmose III. Instead, she crowned herself king and co-ruled with him until her death.

And she was pretty damn good at it. Her 22-year reign was marked by peace and prosperity for Egypt’s people (less so for Egypt’s neighbors). Her time in power saw such an incredible proliferation of art, architecture and statues that the New York Metropolitan Museum of Art has an entire room devoted just to her. She was the master of her own PR, and even constructed a 10-story-tall stone obelisk that displayed her official history-portraying herself as divinely conceived and the rightful ruler appointed by the gods. In other words, “This is mine. I’m the rightful king. Come at me, bitches.”

So why don’t we know about her? Partially due to the sustained campaign by her successors to erase her from history. Partially because it took historians to realize this king was actually a woman. And partially, according to Cooney, due to sexism. She argues that because Hatshepsut didn’t fit into our patriarchal paradigm of a powerful woman ruler. We like our lady rulers messy and prone to scandal (looking at you, Cleopatra). If they ruin things for their people, even better. Hatshepsut did well, hence the mystery.

I don’t know how right she is, but I do know that her theorizing was my least favorite part of this book. She engages in so much speculation about what people were thinking and saying and feeling that I’m not even sure if this book can be classified as nonfiction. I get there’s not a ton of source material that’s survived since 1500 B.C. As a result, there are plenty of times when words like “most likely” or “seems to have been” or speculative terms are used in place of hard facts backed up by documentation. We spend a lot of time inferring what Hatshepsut “must have” felt and thought.  This also affects the prose; many passages are quite repetitive, and reading it became a slog towards the end.

If you have a genuine interest in modern Egypt of historical woman, I’d absolutely recommend this book. But if not, I’d say to give “The Woman who Would be King” a miss. While the subject was interesting, the writing was scattershot and unengaging.