> FAQ Home
> Genre: Fiction > Get off my lawn, you little punk 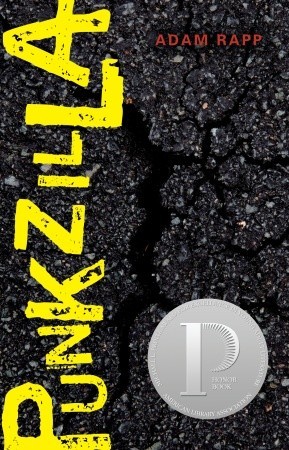 This may be because I’m an old lady of almost 31, but I really don’t like these YA novels where the kids spend the whole time huffing paint and vandalizing shit. A lot of bad stuff happens to the protagonist of Punkzilla, but after each event I kind felt like…well, he deserved it!

Presented as a series of unmailed letters, Punkzilla is the story of teenage runaway Jamie, who’s trying his best to make it from Portland, Oregon to Memphis in time to see his older brother Peter, who has been diagnosed with cancer and given only a few months to live. Jamie, who got sent off to reform school for being a little shit (sorry, but come on) has been dealing drugs and paying for hand jobs in Portland since running away from reform school a few months prior. After getting the news about Peter, he boards a Greyhound and begins writing the letters. The book details what happens to runaways when they try taking a bus across the country all alone with no money — he gets beat up, sexually harassed, loses his virginity (voluntarily, thank god) and makes some friends. I did like some of the characters, particularly the transsexual who helps him out despite having almost nothing of his own (and teaches him a few lessons about being a decent fucking human being), but mostly Jamie’s a waste of space.

I get that his crappy childhood is supposed to account for his behavior, but there’s just no growing or learning in this novel. He stumbles from one encounter to the next, risking his life and slowly destroying his mother. He’s just not worth reading about.