My review of Volume One of Agent of the Empire is available here.

Imperial Agent Jahan Cross is back in Dark Horse’s Hard Targets . Volume one focused largely on the suave, brash, and tortured Cross. It was a fun, if slightly melancholy, spybro story. Volume two is all about Cross the intel man. In this arc, powerful families of Serreno are clawing for power amongst one another and to determine Serreno’s place in the Empire. Cross is sent in to help sort things out. This time, he’s got to use his brains as much as his blaster. 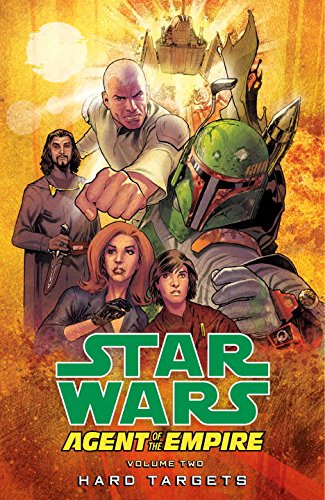 Along the way to completing his mission, readers get some more backstory on Cross and his inner workings. We see that in addition to being a fun-loving swashbuckler, he’s also a competent field agent and perhaps understands more of politics and power than was immediately obvious. Cross is starring in a political thriller more than an action movie, although there is plenty of well-drawn and well-paced action.

I was impressed with how the story worked so many themes and elements in so expertly. The problem of dirty hands, determinism vs. free will, utilitarianism – it’s all in this Star Wars comic book.  These big issues are worked in seamlessly. Even as a self-proclaimed comic book fanatic, sometimes I have a hard time following panels, plot, and who is saying what. Fortunately, Ostrander (writer), Fabbri (pencils), and Heisler (lettering) make it easy on the reader. Their flow is so well done that I didn’t even notice.

Whether or not you know much about the Star Wars universe, this is a worthwhile trade. You don’t need to read volume one. If you can just afford one Cross book, get this one.

On a personal note, this is my fifty-second review. I have enjoyed getting to be a part of this community and raising some money for ACS. Thanks to everyone for the great recommendations and for your work for ACS. I plan to be back next year for a half-Cannonball. My goal will be to review lengthy books that I’ve always wanted to read.