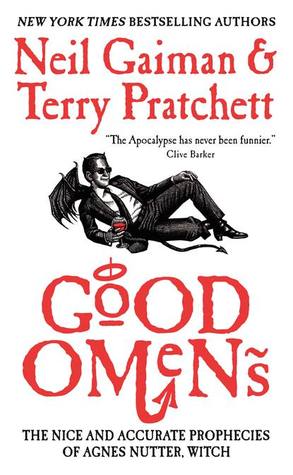 Can I just copy and paste all of my favorite quotes from this book instead of writing a review? It would take 10x as long, but would be 100x more likely to convince people to read one of my favorites of all time!

“God does not play dice with the universe; He plays an ineffable game of His own devising, which might be compared, from the perspective of any of the other players [i.e. everybody], to being involved in an obscure and complex variant of poker in a pitch-dark room, with blank cards, for infinite stakes, with a Dealer who won’t tell you the rules, and who smiles all the time.”

So basically, it’s a book about the end of the world. But it’s funny. Because Terry Pratchett and Neil Gaiman wrote it. And they’re geniuses.

The angel Aziraphale and the demon Crowley should be mortal enemies, but they’ve both been on Earth for about 6,000 years, and they’ve grown rather used to each other. With the Apocalypse imminent, they decide to try to subtly foil it, in order to spend more time on the planet they love so much. Luckily for them, there was a bit of a mix-up concerning the Antichrist, so he’s being raised in a small town in England, with no idea of his true parentage. Oh, and there’s this witch who wrote down a bunch of enigmatic prophecies that her descent, Anathema, has been trying to decipher before the world ends. And a couple of witch-hunters, armed with very sharp pins.

I cannot stress enough how incredibly funny this book is. Every little description, every single character. I listened to it on audiobook this go round, and discovered that the only way to improve onWiitchfinder Sergeant Shadwell is to give him a slightly insane Scottish accent, which he uses to call the fortune teller next door a painted Jezebel at every opportunity.