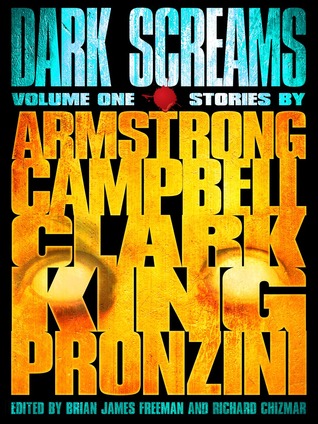 I’ve really been in to horror anthologies lately so this collection was a must buy. I had it on my wish list to remind me to buy it soon, and I then noticed the price had dropped so I snapped it up!

I have to say, for me this was worth getting for the Stephen King & Kelley Armstrong stories alone.  I love the movie Creepshow and King’s contribution to this anthology is the horror comedy ‘Weeds’, in which farmer Jordy Verrill deals with a meteor hitting his land. For me it was just like watching that story in the movie, it was just as creepy, weird and amusing.  Kelley Armstrong writes excellent paranormal novels, but her story here was a suspenseful thriller with a few great twists, proving how versatile she is.  I give both of these stories five star ratings.

‘Magic Eyes’ was written in an engaging way but I guessed what was up with the narrator when the first clue was dropped which lessened the impact of the ending.  Still, I really enjoyed this one and give it four stars.

‘Murder in Chains’ had a lot of potential but I didn’t understand what the ending was supposed to mean at all.  I re-read the whole thing and still didn’t get it.  Because I felt like I was missing something major I give this story two stars.  I liked the writing style but the story felt pointless to me.

‘The Watched’ was a captivating read, with likeable characters I found it easy to sympathise with and worry about.  The creep factor was good too.  I give this story four stars.

All in all this collection is well worth a read.  In general I found these stories to be creepy rather than chilling, but I do read a lot of horror so the stories may be scarier to more casual readers of the genre. The stories are all very well written, as is to be expected by authors of this calibre, and I would recommend this book to fans of creepy/suspenseful horror.